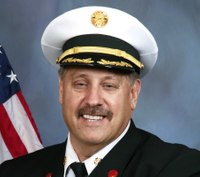 Gary Ludwig serves as the fire chief of the ISO Class 1 Champaign (Illinois) Fire Department and as the president of the International Association of Fire Chiefs. He has 41 years of fire, rescue and EMS experience. Ludwig started his career with the City of St. Louis at age 18, rising through the ranks and retiring as the chief paramedic of the St. Louis Fire Department after 25 years of service. He has also served 10 years as a deputy fire chief for the Memphis Fire Department. Ludwig previously served on the EMS Executive Board for the IAFC for 22 years, with six years as chair. He has a master’s degree in business and management, and has been a licensed paramedic for over 39 years. Ludwig has written over 500 articles for almost every professional publication in the fire and EMS profession. He has also been invited to speak at over 250 professional EMS and fire conferences or seminars. His latest book is titled "Fully Involved Leadership." Ludwig has won numerous awards, including those for heroism, the James O. Page EMS Leadership Award (2014) and the IAFC EMS Section’s James O. Page Achievement Award (2018). He is a member of the FireRescue1 Editorial Advisory Board. Connect with Ludwig on LinkedIn, Facebook and Twitter.