RESTON, VA — At APCO Philadelphia in August 2011, C4i launched yet another innovation in the dispatch communications field.  Switch plusIP ® Command-Center LT is exactly the same IP-based, feature rich, interoperable control console as the Switch plusIP master system, but condensed in a small, ruggedized container to be easily transportable. 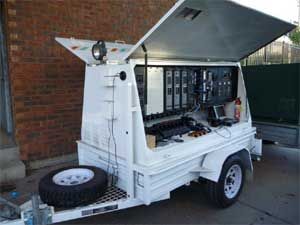 One of C4i’s priorities is to listen to customer input.  Case in point—the original impetus behind this new product was a customer request.  One of the largest Australian railways came to C4i with the need for a reliable turnkey communications solution that could be deployed for incident response—C4i delivered.  The rail organization incorporated the system in to a Mobile Incident Response Trailer with one operator position and the capability to integrate communications from six or more different radios into a single headset.    C4i also delivered and integrated a GSM gateway, satellite telephony and Wi-Fi SIP phones.

This unique project was such a solid success, C4i is now offering this product to any public safety agency, transportation organization, utility, or other entity who may need comprehensive, yet compact dispatch control that can operate anywhere, even in areas lacking radio coverage. The only component they need to add are wheels.  SwitchplusIP Command-Center LT has every building block of C4i’s most powerful system so, though highly portable, it functions the same as it would in a dispatch center.

Features include wireless PTT functionality, configurable operator roles, and individual operating preferences such as volume control. Users can make and receive telephony calls, in addition to transmitting and receiving audio from all radios simultaneously. With radio-radio and radio-telephony patching - this system demonstrates C4i’s cutting-edge work in the interoperable communications arena. The portable system is perfect for temporary emergency operations center applications.  It comes with a battery and power supply so it can be set-up anywhere to act as a ‘communications hub’ in the field. Designed to be extremely durable, SwitchplusIP Command-Center LT provides local incident managers and mobile operators dependable access to vital emergency communications and clear digital reception in disaster situations.

About C4i, Inc.
Based in Melbourne, Australia and Reston, Virginia, USA, the company has over 20 years of experience enhancing the reach and scope of communications networks in the areas of defense, homeland security, public safety and public infrastructure through the application of advanced technologies. C4i is one of the publicly traded Longreach Group companies.