How connectivity can empower your rural fire agency

In the industrial age when cities grew larger and more densely packed, the risks posed by large fires threatened more lives and property than had ever been possible. We take a lot of firefighting technology for granted, but there was a time without fire-retardant materials and smoke alarms when new inventions were developed out of necessity. Some were carefully planned, and others were just dumb luck.

When and how to use fire grenades

In confined spaces, these mini extinguishers can save lives and property

The earliest fire extinguishers were bucket chains leading from a well or water source to the site of a blaze. The first recorded water pump was conceived of around 200 B.C. by Ctesibius of Alexandria, “the father of pneumatics.” That technology was revisited during the Middle Ages, when handheld squirts resembling bicycle pumps could deliver about one liter of water at a time.

In the 15th century, Leonardo da Vinci was commissioned by the Duke of Milan to create a “super oven” for his kitchen so that he could cater for an upcoming house party. Da Vinci outfitted the entire kitchen with a system of conveyer belts that fed dishes into a superheated oven. It doesn’t take the brightest mind of the Renaissance to see how this could go wrong, so da Vinci also installed a sprinkler system in case of a fire.

On the night of the party, the Duke of Milan had invited dozens of guests to see the mad artist at work. When the food took longer than expected, da Vinci sped up the conveyer belts to cook the dishes faster. The kitchen staff were unable to keep up with the flow, and a small fire broke out in the kitchen — triggering da Vinci’s experimental fire extinguishers and washing out all the food in the process. The party was a bust, but da Vinci had just proven the worth of the world’s first recorded sprinkler system.

Centuries after da Vinci’s oven experiment, English chemist Ambrose Godfrey refined the sprinkler system by patenting a system of wall-mounted fire extinguishers. In the event of a fire, fuses attached to the device would ignite and detonate a small chamber of gunpowder. The resulting explosion would spread water onto the fire.

British inventor George William Manby invented the first portable pressurized fire extinguisher sometime between 1810 and 1818. His “Extincteur” could deploy up to three gallons of potassium carbonate onto a fire.

Soda-acid fire extinguishers, first developed in France in 1866, found their way to the United States in 1881 by way of Almon M. Granger. In case of a fire, users would break open a bottle of acid attached to the device and mix it into a larger container of sodium bicarbonate. Just like in a papier-mache volcano, the resulting chemical reaction would pressurize a stream of water that was directed through a hose.

Foam fire extinguishers and beyond

Shortly after soda-acid fire extinguishers were developed, Russian engineer Aleksandr Loran found himself teaching chemistry in the oil-producing city of Baku. After witnessing a plague of oil fires wreak havoc on the town, Loran was determined to find a solution to their problems. The chemist eventually drew inspiration from an unlikely source: the foamy head from a glass of beer.

On the other side of the world, American homes and public buildings were outfitted with glass fire grenades. They were hung from the walls and filled with water or carbon tetrachloride, a colorless liquid that chemically inhibits the combustion process. The globes could be thrown into the fire where they would shatter on contact, while more advanced systems could spring-launch the globes into a fire when a loose solder was melted by flames. 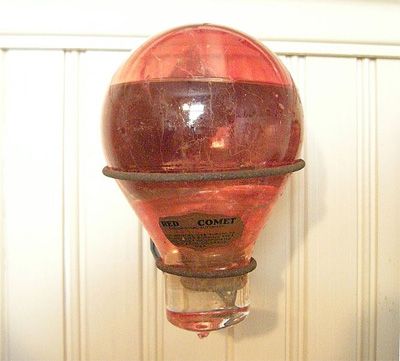 One of the the most popular brands of grenade-style fire extinguishers was manufactured by Red Comet, a Denver-based fire safety company that operated from 1919 into the early 1980s. Though carbon tetrachloride was phased out of fire extinguishers for its health risks and ozone depletion, early glass fire grenades are now traded as antiques.

Newer generations of fire extinguishers haven’t changed too much in design, but their suppressants evolved to tackle different firefighting challenges. Liquid-based fires, gas fires, electrical fires, grease fires, and combustible metals all have their own approved fire extinguishers, each of which is described in the NFPA 10: Standard for Portable Fire Extinguishers.

Their use has expanded greatly, and are often required by law to be included on motor vehicles, boats, airplanes, and public spaces.