Mission-critical data at your fingertips – New World Fire from Tyler

FireRescue1 talks with Chief Larry DiCamillo about how this revolutionary, easy-to-use solution streamlined his agency's operations

Larry DiCamillo is the Chief of the Stafford, Texas Fire Department, a combination department serving an area of 10.2 miles in the suburban Houston area.  With a 65% commercial/35% residential split of the town’s property, the department’s three stations (including a technical rescue) respond to approximately 2,800 runs per year with ALS-staffed apparatus, but no direct fire-based EMS transport service provided.

As with any combination department, the task of managing 40 paid and 50 volunteer staff when it comes to response coordination and planning is a difficult one at best.  Chief DiCamillo, who at the time had just placed an order for 4 new apparatus, realized that the lack of computers on their existing equipment was potentially hindering those efforts even further, and began to look into possible solutions for bringing technology into the hands of his firefighters and supervisors.

“We first looked at getting ruggedized laptops,” DiCamillo says, “but those were about $5,000 each, and didn’t include the costs of the data plan which would have been needed for each.  Our county is already on a program which uses those laptops, but there’s also a charge to go through the county portal for each laptop that we would have purchased.

“Then, one day, I was looking through a trade magazine, and I saw an ad for StreetWise CADlink.  Basically, it’s a tablet-based response software which provides notification and mapping, navigation and routing, live unit locations, hydrant data display, and a bunch more features.  I called them and asked about finding out more, and they impressed me by doing a live demo for us immediately.

“I liked it enough that I decided to present it to the County Board as a proposal, figuring we might have a chance of implementing it.  What happened next surprised me – not only were they interested, but the Director of Emergency Services at the time wanted to know about implementing it for the police department as well… we went to the IAFC conference to check it out in more detail, even though nobody had prior been planning to go.”

After the conference, Chief DiCamillo went back to the county’s Tech Committee and proposed to purchase 7 Motorola XyBoard tablet devices, enough to cover his apparatus and supervisor vehicles. (StreetWise CADlink uses agency-supplied devices to avoid tying that agency into a particular device or data provider in the longer-term picture, which the Chief says was a major factor in their decision-making process.  As he says, “we really needed the mapping feature more – unlike the police, we don’t really need 2-way data as much for our fire mission, since most of our updates come by radio transmission.”)

“That would have been a total of about $15,000,” DiCamillo says, far less than the $35,000 that the same number of laptops would have cost, “but the committee, as part of their own process, decided to approve the purchase of 13 devices, which allowed us to put one in every vehicle we have.” 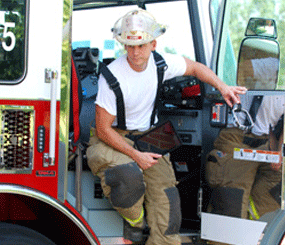 “We’ve had the complete removal of routine radio traffic from our responses,” he says, noting that the frequencies are now more available for more urgent communications.  “The planning features, including the hydrant positions showing on the live mapping on the device, have really been helpful.  For example, just recently we had a warehouse fire where the supervisor on duty was able to see not only where those hydrants were, but was able to specifically direct the response as it evolved by positioning incoming companies at those hydrants and having them run their lines in a coordinated manner.  Since we could see the units live on the map, he based those decisions, in turn, upon which direction they were coming in from.”

As the Chief, that AVL functionality is also providing DiCamillo with an invaluable window into his agency’s real-time status, including situational awareness not only of his apparatus locations, but also their current staffing level and available resources as a result.  “We have volunteers who are on-duty (not on-call) for 24-hour shifts, and it’s important to know what apparatus are available at any given moment,” he says, as an example.  “If I’m responding into an incident, I can see where those apparatus are coming from, and it gives me a better window into coordinating the response right from the beginning.”

Another feature that Stafford has been using to good effect is the pre-planning component of the StreetWise CADlink software.  “It’s given us a guided module for conducting our pre-plans for responses to structures in town, including our higher-risk areas.  The Preplan Wizard feature ensures that the person who’s doing the pre-plan hits all of the relevant data points for a structure or area, based upon the nature of it – if you answer a question it provides you one way or another, it prompts you for that relevant information.  We’ve been able to add ‘sticky waypoints’ on the mapping to identify high-to-low water flow and other scene considerations.”

“We’re really proud of our agency,” Chief DiCamillo says, “our volunteerism is really outstanding, and we always have 10-15 applicants waiting in the wings for potential vacancies.  That comes about through the professionalism of our agency as a whole, with top-notch equipment, and response times less than 5 minutes – with a combination department, that’s not always the case.  Our volunteers are treated the same as the career folks, they hold their own and are really respected, and that enables us to be as effective as we are.”  With StreetWise CADlink, he says, he feels confident that that will continue even more efficiently and effectively into the future.

To find out more, or schedule your own live demo, visit Streetwise CADlink online today, or click the banner below for more information.