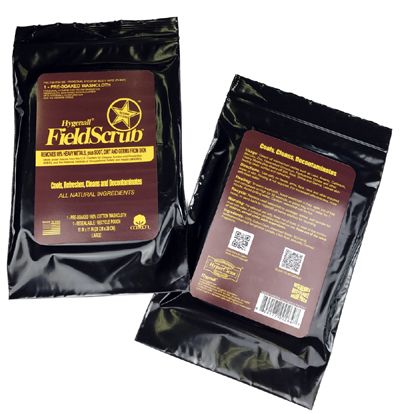 The National Institute of Occupational Safety and Health (NIOSH), have said exposure to known cancer causing chemicals often found in soot, may not be the only contaminate that firefighters are chronically exposed too. Heavy metal oxides, such has Hexavalent Chromium (CrVI), which comes from heating stainless steel, chrome, and some anti-corrosion coatings, combined with incorrect hygiene practices may be powerful contributing factors to statistically increased cancer rates amongst firefighters and other first responder professionals.

“To date, firefighter hygiene practices have centered around cleaning off soot with baby wipes, and ignoring microscopic quantities of heavy metals such as Lead, Hexavalent Chromium, Arsenic, Cadmium, Zinc, Nickel, and other heavy metals, and possibly nuclear oxides at HazMat sites,” said Michael McKinnon, CEO of Hygenall Corporation. “Regular anionic based soaps and baby wipes do not clean off heavy metals very well, which leaves an exposed firefighter to microscopic quantities of metals, and in-turn may cause dangerous health effects such as cancer.”

Hygenall FieldWipes™, FieldScrub™, FieldWash™, and ToxOff™, called Full-Spectrum cleaners, do more than clean off soot, grime and germs. Made under license from the National Institute of Occupational Safety and Health (NIOSH), Hygenall’s firefighting products are designed to displace and clean off cationic metals more effectively than common soap and water or “baby wipe” based products alone. According to Hygenall Corporation, heavy metals stick to skin and surfaces through a strong electrostatic bond and until that bond is disrupted, firefighter personnel can be affected, or even carry metals home and expose family members every day. “Given the dangers of chronic exposure to heavy metals, firefighters should follow new guidelines for cleaning and decontamination daily,” McKinnon said. “A new mindset is needed to imagine that toxins are all around the modern firefighter every day, and he or she must make improved hygiene practices second nature.”

All Hygenall products are manufactured in the United States by Hygenall Corporation, and are made from natural “green” ingredients. Hygenall Full-Spectrum™ firefighting soaps and cleaners can be purchased on GSAADVANTAGE.Gov, or from local firefighter equipment distributors.

About HYGENALL CORPORATION
Since Bloomberg BusinessWeek featured Hygenall® as one of “America’s Most Promising Start-ups” in 2009, Hygenall has worked hard to become the international thought leader in heavy metal decontamination with innovative Full-Spectrum™ cleaning technologies that help protect millions of people around the world from the ravages of toxic metal poisoning. Founded in 2008, Hygenall Corporation has deliberately taken leadership in the marketplace by creating brands that solve problems for people in several markets including Industrial, Medical, Government, Firefighting, Aerospace, Retail Shooting Sports, Military, and Consumer Health and Beauty. Hygenall differentiates itself by offering a range of products based on technology that was developed under critical scientific standards in government laboratories and bringing them to market at an affordable price. Most Hygenall products are made under license from the Centers for Disease Control and Prevention (CDC). Hygenall is headquartered in Huntsville, Alabama with offices throughout the Americas. Hygenall brands include Hygenall® LeadOff™, Hygenall® HygaStat™, Hygenall® HexOff™, Hygenall® FieldWipes™, Hygenall® FieldScrub™, Hygenall® FieldWash™, Hygenall® Industrial™ and Hygenall® branded consumer soap.