Brought to you by Air Vacuum Corporation 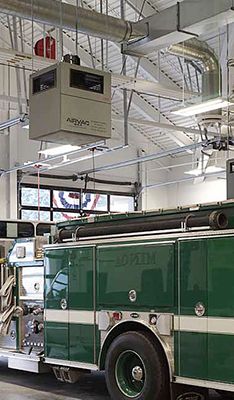 DOVER, N.H. — Across the country, fire stations are focused on removing toxic diesel fumes in an effort to reduce the risk of cancer for firefighters.

“It’s actually like a hidden killer. If you’re not getting hurt in the fire, it’s something that absorbs into your skin that if you don’t get rid of later, can build up and cause cancer,” said Scott Venderbrook, Fire Chief, Estero, Florida. Estero Fire recently installed the AIRVAC 911 engine exhaust removal systems in all of their stations to keep their crews healthy. “We wanted to keep the smoke from the exhaust of the large fire trucks from being in the bays, where guys are breathing it in and where it’s being pushed into the living quarters or where their gear is stored.”

In Tennessee, the City of Chattanooga Fire Department has 20 fire halls. They have the AIRVAC 911® System installed in four of them and a new fire hall being built will also include the system. “We have been more than satisfied with the systems’ performance and the ease of service. The AIRVAC systems are phasing out the current hose systems we have and are much more efficient and cheaper to maintain,” said Steve Harvey, General Supervisor for the Fire Department.

“From the maintenance side, all that is required is to change the air filters in a timely manner. We feel like the AIRVAC 911® system removes the fumes inside better than the hose system because of the area they cover. This eliminates having to hook up apparatus,” commented Harvey. “In my opinion, these systems are the best by far for safety concerns about the air in fire hall bays.”

Learn more about the AIRVAC 911® System and request a free proposal.
Air Vacuum Corporation will be at the FDIC Tradeshow in Indianapolis, IN from April 23-28. Stop by our Booth #832.

About Air Vacuum Corporation
Founded in 1994, Air Vacuum Corporation designed the AIRVAC 911® Engine Exhaust Removal System to provide a self-contained, affordable, attachment-free, fully automatic system for removing hazardous gases and particulate from fire station and EMS station work environments. It features a proprietary multi-directional airflow design that maximizes the particulate and gas removal from the breathing zone of the apparatus area. AIRVAC 911® is the only system to eliminate “exhaust backwash” – the exhaust fumes that re-enter the building as vehicles leave and return from their calls. This energy-efficient system is manufactured in the U.S.A. and meets NFPA 1500, OSHA, IBOCA, EPA and GSA standards. Visit: www.airvac911.com

Want to know more about Air Vacuum Corp.?
Get info
Tweets by hashtag