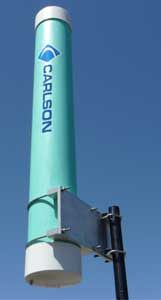 TV white space presents many opportunities that never existed before, including expanding broadband capabilities in areas that were previously underserved. As the impending rollout approaches, new and more sophisticated technologies are being developed every day that will maximize the effectiveness of this new spectrum.

Case in point, Carlson recently engineered a new breed of antenna never before available. This high-gain omnidirectional base-station antenna is specifically designed to meet the demands of TV white space (TVWS), which are the areas of unused spectrum in the TV bands located between 470 MHz and 698 MHz in the UHF range.

TVWS technology is unique in that radios must interact dynamically with spectrum databases to determine available channels to use. Keily Cronin, Carlson’s TVWS product manager noted, “This innovative antenna design fully harnesses the potential of the UHF band, leveraging the nuances of the signal to provide unmatched performance.”

Unlike any other base-station antenna before it, Carlson’s breakthrough design provides strong, consistent gain across the entire UHF band and is not limited to specific channels or geographic areas. Users can expect optimal performance regardless of their location or channel.

“Somebody using channel 14 will see the same throughput as someone using channel 51, with virtually no difference in quality of signal,” said Rick Gustafson, Carlson’s antenna and enclosure production engineer. “

The flexibility the new antenna provides is key when it comes to utilizing TVWS technology. This consistency is particularly important among critical communications users such as public safety, government and utilities, not to mention the hundreds of wireless Internet service providers (WISPs) who deliver broadband to millions of customers.

Carlson is early to develop equipment to leverage the newly available TVWS spectrum. The company created the omni antenna in order to optimize the performance of its RuralConnect broadband radio, after discovering that the global market did not offer anything like it. Carlson’s new design is a result of data gathered from challenging terrain across the nation at the company’s TVWS trial deployments, where engineers and customers have been working hard to find the most effective way to utilize this new technology.

“Antenna design is actually one of the most challenging pieces of the puzzle in RF engineering,” said Craig Domeny, Carlson’s director of engineering. “It’s as much art as it is science.”

Yet once again, Carlson’s engineering team has proven they can create a solution others have insisted was impossible.

“We tried several different concepts, and this one allowed us to get an additional gain over a dipole without compromising bandwidth or coverage,” noted Jim Carlson, CEO and chief engineer. “Consistent performance across the band is a critical factor with frequency-agile radios, and the new design provides omnidirectional performance with 6 dBi gain across the TVWS spectrum.”

The new omni is built to last and withstand extreme weather conditions, Gustafson noted. The antenna is constructed of stainless steel and aluminum alloy and enclosed in strong PVC. The four-foot-by-six-inch cylindrical enclosure design provides for minimal wind loading and ice formation, easy shipping and handling and an aesthetically-pleasing appearance.

“With the addition of this high-performance antenna, we’re pleased to be able to offer a strong, holistic solution to our customers,” said Cronin.

This new omnidirectional UHF antenna, the only product of it’s kind in the TVWS arena, marks yet another milestone for Carlson. Innovation continues to set Carlson apart, as the company leads the charge in RF solutions and TVWS technologies.

About Carlson
For more than a decade, Carlson has led the way in engineering high-speed wireless communication solutions for a broad spectrum of applications by using RF technology to deliver full voice and data connections, no matter how rugged the terrain. Today, Carlson is considered a pioneer of the revolutionary new TV white space broadband technology. More than 20 million customers in nearly 200 communities worldwide rely on Carlson radios for their public safety communications and broadband needs.