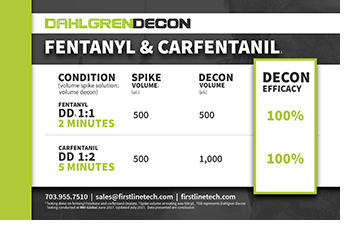 This comes on the heels of a similar announcement from First Line Technology when they publicized last month that Dahlgren Decon neutralizes 100% of fentanyl in under two minutes. Absolute efficacy under five minutes for some of the most potent synthetic opioids known to man makes Dahlgren Decon one of the most effective decontamination solutions available.

“The data is irrefutable. It comes down to the superior chemical composition of Dahlgren Decon,” said Dr. Christina Baxter, former Program Manager for the CBRNE subgroup at the Technical Support Working Group. “Dahlgren Decon uses peracetic acid, which is double the strength of any hydrogen peroxide solution. It also comes in solid form which allows users to mix it on-site so there is no degradation of concentration. You always know what you’re getting with Dahlgren Decon.”

“We couldn’t be more thrilled with these results, but our work is not done.” said Amit Kapoor, President of First Line Technology. “Dahlgren Decon needs to be in the hands of every first responder, law enforcement officer and hazmat crew worldwide.”

Dahlgren Decon, manufactured by First Line Technology through an exclusive technology licensing agreement with the Naval Surface Warfare Center Dahlgren Division (NSWCDD), is a three-part decontaminant solution that immediately decontaminates chemical and biological warfare agents, and now proven to be effective against both fentanyl and carfentanil.

About First Line Technology
First Line Technology, LLC designs and manufactures disaster preparedness and response equipment, including PhaseCore personal cooling items, DeconTect decontamination products, and AmbuResponse mass casualty response systems. Our mission is to prepare for, protect against, respond to and recover from all hazards with lab to life-saving technology.