(eBook) How to build a fire station

Podcast: How to prepare for and respond to violence at protests

Rocky Mountain Pandemic: An inside look at how Eagle County, Colorado – home of Vail – has managed the COVID-19 pandemic

After the Pomp and Circumstance: There is so much MORE to learn

Chiefs, check your personal preferences at the door and do what’s right

Leadership by lane: Are you driving in the fast, slow or center lane in your organization?

Failure to lead in the fire service: The consequences of doing nothing

Which one do you think completed the challenge first?

Departments across the country have been making waves on social media with their viral cold water challenge videos.

FireRescue1 and Fire Chief created a Cold Water Challenge guessing game with some of the most notable fire service leaders.

Each week, we’ll run a face-off challenge for you to judge. The game is simple: vote for who you think took the challenge first; we’ll reveal the true order after the bracket is complete.

Our mission is also simple: give firefighters a reason to have a bit of fun and keep the challenge alive — and the associated donations made to the National Fallen Firefighters Foundation.

Cast your vote below on which fire service leader you think completed the challenge first. At the end of the game, contest winners will be randomly selected and will receive a FireRescue1 T-shirt and challenge coin as a prize. 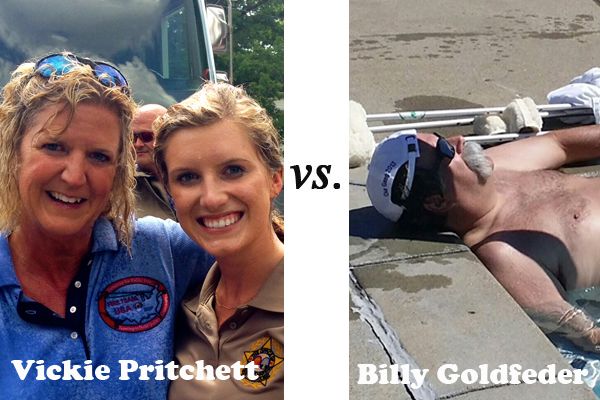 Vickie Pritchett became involved in the fire service in 1997. She currently serves as the Director of Public Fire Protection with the National Fire Sprinkler Association.

Billy Goldfeder, a firefighter since 1973 and a chief since 1982, serves as Deputy Fire Chief of the Loveland-Symmes (Ohio) Fire Department. He also hosts and sponsors FirefighterCloseCalls.com.

"The Question" section brings together user-generated articles from our Facebook page based on questions we pose to our followers, as well as some of the best content we find on Quora, a question-and-answer website created, edited and organized by its community of users who are often experts in their field. The site aggregates questions and answers for a range of topics, including public safety. The questions and answers featured here on FR1 are posted directly from Quora, and the views and opinions expressed do not necessarily reflect those of FR1.