DOVER, N.J. —Today, Casio G-SHOCK introduces the latest color addition to the men’s GRAVITYMASTER series with the GA1100-1A1. The watch, which is built specifically for aviation experts, will now come in G-SHOCK’s “Black Out” colorway, featuring slight accents of white, blue and red on the face and hands. 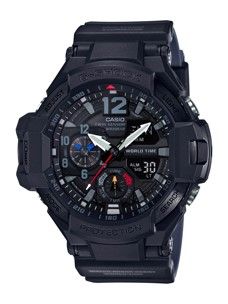 The GA1100-1A1 boasts G-SHOCK’s twin-sensor technology of a digital compass and thermometer – which allows for accurate bearing and temperature readings, as well as Dual Dial World Time display. Other premium features include an auto LED super illuminator and neo-brite luminous hands and markers to allow for maximum visibility in dark environments.

Each model also comes equipped with standard G-SHOCK technology of shock resistance and 200M water resistance, as well as world time (in 31 time zones and 48 cities + UTC), four daily alarms and one snooze alarm, a 1/100th stopwatch and countdown timer and 12/24 hour formats – all in a 52.1mm case.

The GA1100-1A1 will retail for $250, and will be available for purchase beginning in March 2018 at G-SHOCK retailers, including select Macy’s and jewelers, shopcasio.com, and the G-SHOCK Soho Store.

About G-SHOCK
CASIO’s shock-resistant G-SHOCK watch is synonymous with toughness, born from the developer Mr. Ibe’s dream of ‘creating a watch that never breaks’. Over 200 handmade samples were created and tested to destruction until finally in 1983 the first, now iconic G-SHOCK hit the streets of Japan and began to establish itself as ‘the toughest watch of all time’. Each watch encompasses the 7 elements; electric shock resistance, gravity resistance, low temperature resistance, vibration resistance, water resistance, shock resistance and toughness. The watch is packed with Casio innovations and technologies to prevent it from suffering direct shock; this includes internal components protected with urethane and suspended timekeeping modules inside the watch structure. Since its launch, G-SHOCK has continued to evolve, continuing to support on Mr. Ibe’s mantra “never, never give up.” www.gshock.com