The county of Santa Barbara, California contains over 2,500 square miles of breathtaking and sometimes dangerous terrain, including rocky beaches, unblemished coastal islands teeming with wildlife, and the steep inland mountains of the Los Padres National Forest.  Such picturesque wilderness, within easy driving distance of Los Angeles, attracts thousands of visitors every year.  Most enjoy the county’s natural beauty without incident, but sometimes, accidents can happen.  When things do go wrong, the members of the Santa Barbara County Search and Rescue team are responsible for finding and rescuing missing and injured persons within Santa Barbara’s backcountry. 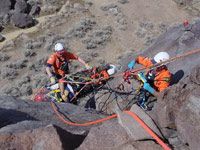 Responding to reports of lost or hurt individuals on the county’s hundreds of trails and peaks raised safety concerns for the volunteer members of SBCSAR.  Although searchers are trained in the latest safety procedures, the remoteness of the terrain and the challenges of operating in small teams meant the risk was high. Nelson Trichler, an incident commander and Public Information Officer for the team, says it was clear that some sort of radio-based GPS tracking solution was needed.   “Each searcher could carry a GPS receiver with them in the field, but that does you no good if they are incapacitated and unable to communicate their location to the dispatch operator.”

Trichler contacted PRYME Radio Products, a company which makes audio accessories such as earphones and headsets for two-way radios, about their GPSMIC system.  The GPSMIC, a remote speaker microphone with an integrated Global Positioning System receiver and modem, is capable of sending data messages containing the user’s location data over a voice radio channel.  Reports can be sent at various programmed intervals, such as when the user presses the Push-to-Talk button on the microphone, after a set period of time has elapsed, or when the user has moved a set distance from his or her last reported location.

The capabilities of the PRYME hardware made the system a natural fit.  Because equipment for the team is funded by a mixture of donations and grants from the Santa Barbara Country Sheriff’s Department, being able to use their existing two-way radios and repeater channels made the PRYME system very attractive.  “This isn’t possible if we have to use separate radios or dedicated data channels,” explained Neil Palt, one of the team’s communications specialists. 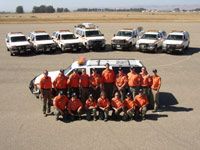 SBCSAR first deployed GPSMICs during October of 2009, not in the wilderness, but in the community of Isla Vista, an unincorporated area of Santa Barbara that consists primarily of campus housing for students attending the nearby University of California, Santa Barbara.  Although the area is closed to civilian motor vehicles each year during Halloween, Isla Vista attracts as many as 40,000 costumed partiers who come for the spectacle of one of the most notorious Halloween celebrations in the United States.

The team deployed several squads of three-to-five people each on foot at various points around the community.  SBCSAR also operated several SUVs which were primarily used to transport sick and injured people who could not be treated on scene to areas where they could receive additional treatment, or be picked up by an ambulance and transported to local hospitals.  Each team member and vehicle was outfitted with a two-way radio and a PRYME GPSMIC device.

Location reports from the GPSMICs were monitored from a mobile command center at a central location within Isla Vista, by SAR members acting as dispatchers.  The dispatchers could easily tell the location of each team and vehicle from the received location reports, and that made it possible to quickly select the team that was closest to respond to the scene of any incident call.  “We were primarily interested in the GPSMICs for safety reasons” says Trichler, “But knowing where everyone was also made it possible for us to deploy faster and more efficiently.”

By the end of the event, the GPSMICs had attracted attention from more than just Search and Rescue members.  “We had several local law enforcement officers and fire fighters working the event who dropped by our command center to check out the system,” says Palt, who recalls that officers were impressed with the combination of the PRYME hardware with mapping software.  “They were envious that we had a complete Computer Aided Dispatch system.”

CAD software allows the location coordinates sent by the GPSMIC hardware to be displayed as icons on a map.  The location of each GPSMIC updates as new data reports are received.  Scott Kuei, the Vice President of Product Development of PRYME, explained that GPSMIC users have the choice of several different mapping solutions.  “Although we offer our own software for tracking GPSMICs, we support integration of GPSMIC data into other third-party applications.”

As their software solution, SBCSAR chose Terrain Navigator Pro by Mytopo.  “TNP is one software package that has added support through their Team Tracker module for the GPSMIC and it has features that are uniquely suited for Search and Rescue users, including US Geological Survey topographical maps,” which are required when sending team members into craggy areas with sheer cliffs and other impassible features.   Kuei says that PRYME supports software integration using an extensive Application Programming Interface, which allows other software packages to parse the PRYME location data.  PRYME’s own software suite, GPSMIC Tools, is available for free to companies and organizations which own GPSMIC units.  The suite includes two software applications: GPSMIC Configurator, which is used to program the GPSMIC’s hardware, and a mapping application, GPSMIC CheckPoint

For the members of Santa Barbara County Search and Rescue, the GPSMIC and Terrain Navigator Pro software continue to be integral parts of their operations.  The team responds to an average of two incidents a week, including high-angle rock rescues, downed aircraft, swift water rescues and other wilderness medical emergencies.  Trichler reports that each of the team’s vehicles is now outfitted with a GPSMIC device and that each group of team members that is deployed on foot to an incident has at least one member who carries a GPSMIC.   In addition to the dispatch locations in their mobile command vehicle, the team has also outfitted its headquarters at the Santa Barbara Coroner’s Office with two additional base station dispatch locations.

The GPSMIC technology will also greatly benefit SBCSAR during emergency evacuations due to disasters such as earthquakes and wild land fires.  Prior to receiving this equipment the team was responsible for evacuating thousands of residents during the Gap, Tea and Jesusita fires in the communities surrounding Santa Barbara.  "These wild land fires move incredibly fast and often put our team members at substantial risk so having a system showing where our member and their vehicles are is a tremendous safety and operational help" according to Trichler.  "From a safety standpoint we can alert the teams as to escape routes based on their location and which way the fire is going.   Operationally, we can track where are teams are and have been to document what areas have been evacuated, eliminating the potential of wasting time covering the same areas more than one."

As with any new equipment and technology, the installation and learning curve to use it is a factor to consider.  From the perspective of customer service and support, "PRYME has been outstanding to work with" Trichler said.  "They have been there ready to answer any questions and assist us with installation and use of the equipment."

Trichler says that the tracking technology is essential to every aspect of their Search and Rescue operations.  “We’re out there trying to ensure that missing people are safe.  We need to stay safe while doing it.”