How to buy fentanyl protection and detection (eBook)

ORLANDO, Fla. — An off-duty Orlando paramedic posted a play-by-play of the Pulse nightclub shooting to Facebook as the incident unfolded by listening to a public live-stream of radio traffic.

Paramedic Jordan Hubler, who works for a private EMS agency, was returning home from a movie early Sunday morning when lots of police cars got her attention.

"We saw so many police vehicles flying past us I knew something terrible had happened so my friend pulled up the 5-0 radio app and we listened in," Hubler wrote to EMS1. "We couldn't put it down, hanging onto every word to try and understand what was happening."

Hubler joined three other listeners in the early minutes of the incident. Later she was joined by more than 7,500 live listeners.

Hubler immediately looked for local news coverage and found only regular programming. When she saw the Pulse Orlando Facebook status, posted at 2:09 a.m. ET, "Everyone get out of pulse and keep running" she wrote a comment on the Pulse post. 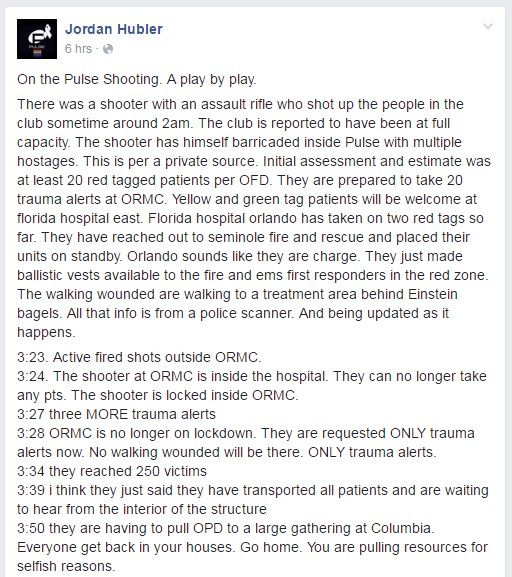 A screenshot of Hubler's update to the Pulse Facebook page captured at 2:04 p.m. Sunday, June 12

As the incident progressed with radio traffic about red tags and the shooter barricaded inside the building, Hubler edited and added to her initial comment.

"People started hanging onto my every word and I just felt like if I was still listening (to the radio traffic) maybe they would still like to know what is happening too," Hubler said.

Hubler, scheduled to work as a paramedic Sunday morning, made it home to get some sleep. She stayed awake for a while, but finally fell asleep just before 5 a.m. Another round of radio traffic announcing shots fired and more patients woke her.

Facebook followers were still confused on how to listen to the radio traffic so Hubler continued to update the post. "I told them to get a scanner and someone posted a live broadcast link," Hubler said. 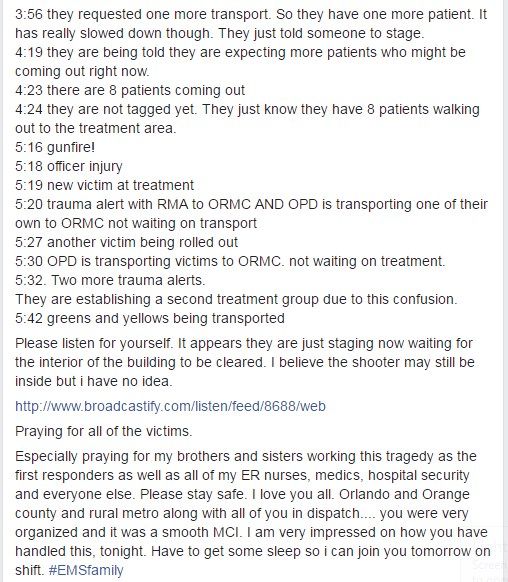 A screenshot of Hubler's update to the Pulse Facebook page captured at 2:04 p.m. Sunday, June 12

As Hubler posted updates she was compelled to add disclaimers and how she was able to share the information. "So many wanted actual facts and didn't understand that it was just a play-by-play as I heard it," Hubler said.

4 Wis. FDs using GPS to determine response instead of jurisdiction