Calling all volunteers: 3 ways to increase the volunteer member pool

Reality training: Every patient move is a high-risk move

Engineers are driving too fast!

Why the truckie is the better firefighter

Bottom line is this: engine guys have one job, that‘s it; there is a very small amount of thinking going into attacking a fire as an engine man

So, I am sure you have all read Billy Galvin‘s B.S. on "Why Engine Guys Are Better Than Truckies," and probably got a few laughs.

He‘s the funny guy. And trust me, if you ever spend 24 hours with him, he will make sure you know it.

Sometimes I think he talks just to hear himself talk. Anyways, I felt the need to write my rebuttal. Since I am in fact a “truckie" now.

So until recently I‘d always been an engine guy. When I was a volunteer, we didn‘t even have a truck. And when I worked in Highland Park, if the truck was being used at a fire for more than the boss' warming (or cooling) station, we must have really screwed up.

With such a small crew, the engine guys had to do it all. We horizontally ventilated, or we would knock a couple holes in the roof from inside the attic to get the heat and smoke out. If you ever need a good shoulder workout, try blowing through a layer of cedar shake, under several more layers of roofing, with a pike pole.

But, I never even knew what truck work was or how important it was until I started in Detroit. I recently (and reluctantly) put in a transfer to a truck company, in order to get into a certain battalion. And I am glad I did. Here's why.

Bottom line is this: engine guys have one job, that‘s it. There is a very small amount of thinking going into attacking a fire as an engine man. Awesome, so you sprayed water at fire. Pretty simple if you ask me. I mean, I have done it, so I know.

Truck work, now that‘s another story. Basically no fire goes out unless some form of truck work was done. I mean, technically you engine guys would be running around the house looking for an opening if it wasn‘t for us truckies forcing the door for you. How much work gets done when the engine crew can‘t get to the fire?

I know what you‘re thinking. Not every fire needs some jerk up on the rooftop hammering away. Sometimes vertical ventilation isn‘t necessary.

But what happens when the engine guys get themselves turned round in a fire and need to bail out a window? Oh, guess what, there‘s a ladder waiting there so that you don‘t break your neck falling from the second story window. No need to thank us, but you are welcome.

When you engine guys stick your hooks through the walls and ceilings, hooking yourselves into electrical wires, do you wonder why you haven‘t fried your hair off? Do you think the power just miraculously went off on its own?

No, one of the truckies that you look down upon thought to take care of that for you, on top of everything else they had to do. Again, no need for thank yous, but you are welcome.

And then there is the obvious: life safety. Isn‘t that our number one priority? Sometimes people are trapped. Sure the engine makes a grab here and there, but it‘s the truck guys who will search through the smoke without a line to show them the way out.

There is something to be said about a bunch of guys with the guts to go unknowingly into the obscurity of pitch darkness and emerge with a child clutched under one arm. How did he find his way out? Don‘t ask stupid questions like that. He‘s a truckie. That‘s how.

Let‘s be honest, being on the roof of a burning house is a rush in and of itself. I mean, it‘s basically what defines a good truck company. We do all of the above, plus go up top and pound holes into the roof so that you sweet little engine donkeys don‘t burn your faces off.

Oh and news flash, heat rises. How do you think it feels up there, cooking on top of shingles like an egg in a frying pan?

And sure, maybe they are having a party below us. Maybe we weren‘t invited either. But maybe we never even wanted to be a part of your party anyways. Maybe we are having our own party, a party where we all are laughing at how awesome you guys think you are. Ever think of that? 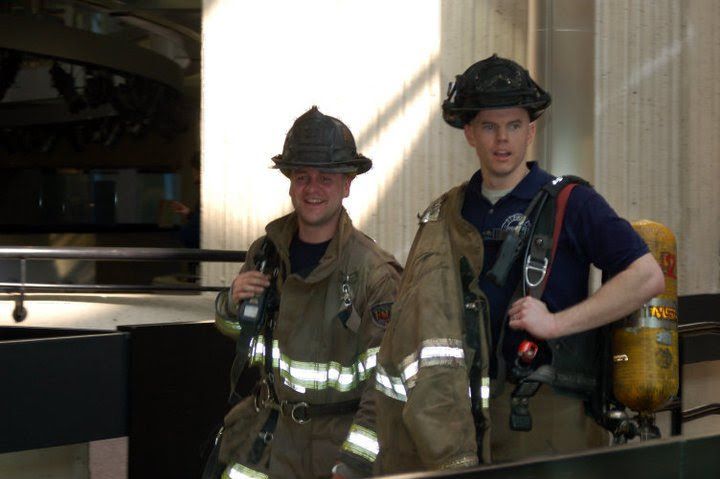 Billy Galvin and I back during my Highland Park days.

I chuckle as I write this because deep down inside me I know that some squad man will read it, gather up all his squad buddies, and bust their guts with laughter at the thought of truckies and pipemen seeing themselves as important parts of the fireground.

Because we all know that they think it is their super powers that put fires out and save lives. A squad man just being on scene sometimes will scare the fire into submission, right guys?

Hopefully none of you take this too seriously. I do have a newfound love for truck work, but I will always love that engine, and I still jump at every opportunity to head across the floor to that brand new engine that sits next to the truck at my house.

I guess I've been lucky to have been invited to both parties. We have the best damn job in the world no matter what type of company we work on. And it‘s that team aspect that makes it so damn good.

Be safe out there.

Uniform Stories features a variety of contributors. These sources are experts and educators within their profession. Uniform Stories covers an array of subjects like field stories, entertaining anecdotes, and expert opinions.