Making for a safer workplace for fire and EMS providers

The skinny on firefighter diet trends

Human performance under extreme stress: The fire and EMS connection

Create a ‘Leadership Library’ to help develop your members' skills

‘See the gorilla’: Situational awareness allows us to spot hazards

Finding scientific proof linking firefighting activities and certain cancers is a long, difficult process; while more research is needed, the data we have can guide prevention

This feature is part of our new Fire Chief Digital Edition, a quarterly supplement to FireChief.com that brings a sharpened focus to some of the most challenging topics facing fire chiefs and fire service leaders everywhere. To read all of the articles included in the Summer 2016 issue, click here.

Research over the past couple decades has reported some mixed results about the relationship between firefighting and cancer, which has been used to argue against supporting firefighters who contract the disease. Recent research that has reviewed and combined data from previous studies, weighing the studies based on the size of the sample, has found increased risks for several different types of cancer.

NIOSH also just completed a largescale cohort study combining data from Philadelphia, Chicago and San Francisco fire departments looking at risk, which confirmed many of the previous results and added an increased risk for malignant mesothelioma.

Research, laws and the link between firefighting and cancer

There is sufficient data to support a link between several types of cancer and firefighting. Yet, there is a long road ahead for research on the topic of firefighter cancer and much to be learned about the magnitude of the risk, types of cancers, cancer prevention and the specific exposures that lead to cancers among firefighters.

Complicating the findings is what is referred to as the “healthy worker effect.” Given the job selects for relatively healthy individuals at entry, it would be expected that rates of cancer should actually be lower among firefighters than the general population. Understanding the actual magnitude of the increased risk is likely higher than what the current data is showing.

The findings also are complicated by the fact that cancer risk among volunteer firefighters has not been the focus of most research — so increased risk among that population is actually being pooled with the general population group. While efforts have been made to add job codes for second occupations in some hospital records, many volunteers do not consider their firefighting as an occupation. Retired firefighters also are likely missed in research that focuses on a population approach. So what’s next? Where is research headed and what do we still need to know?

In early 2015, the National Fallen Firefighters Foundation convened a meeting of fire service leaders, occupational medicine physicians, scientists and government officials for an occupational cancer in the fire service strategy meeting. The meeting resulted in the development of the Fire Service Occupational Cancer Alliance with a focused effort on decreasing cancer disease and death among firefighters. They reviewed the current knowledge available about cancer and future research directions. Several areas were identified including the need for a cancer cohort study, a fire service cancer registry, data collection on long term and chronic exposures to toxins including exposures beyond the fire ground, and a specific focus on under-researched groups of firefighters. Participants were tasked with helping to move the identified needs forward.

A consortia of researchers, NIOSH and industry sponsors, led by Casey Grant at the Fire Protection Research Foundation, are conducting a study funded by the Assistance to Firefighter Grant’s Research and Development mechanism to examine firefighter PPE. The first phase of the study is focused on learning what contaminants are present on gear.

Follow-up phases will evaluate cleaning processes and understanding how clean gear is when it is cleaned through different processes. Unfortunately, little is known about what it takes to remove chemical toxins and biologic pathogens in gear — and at what point the gear is clean enough to not be a risk to the firefighters they are supposed to protect. The findings will then be used to inform the standards of NFPA 1851: Selection, Care, and Maintenance of Protective Ensembles for Structural Fire Fighting and Proximity Fire Fighting.

What research has been done on the fire and emergency response environment by NIOSH and UL found several known and suspected carcinogens to be present during and after a fire, including polycyclic aromatic hydrocarbons and volatile organic compounds. What is most alarming is the presence of these chemicals even when the air appears to be clear during times like overhaul and investigation.

Exposure research conducted by NIOSH of the fireground environment found that, despite the consistent and appropriate use of PPE and SCBA, carcinogens can and do still enter firefighters’ bodies. It appears that carcinogens are entering the body through the skin in general and that the neck is a particularly vulnerable area.

Efforts to quantify the exposures have found that carcinogens are in high concentrations on PPE, hoods and gloves, which provides a secondary route of exposure even after leaving the fireground. Hoods, in particular, have been identified as high risk as they tend to capture and hold carcinogens close to the neck for extended periods of time. Other exposures for firefighters include exposures to the nitroarenes in diesel exhaust and other hazardous materials responses.

Another area of study includes exploring exposures among specific populations. Scientists at the University of Illinois Fire Science Institute and Skidmore College are examining exposures specific to fire instructors who are exposed to repeated burns. Instructors in particular may be at increased risk given their extended exposure, although the risk has not yet been quantified.

The cancer prevention focus is increasingly on eliminating exposures as soon as possible upon leaving the fireground. This can include consistent and effective gear cleaning, not contamination of living environments by keeping gear in the bay and not carrying gear inside enclosed vehicles. Other prevention efforts are focusing on improving diet and fitness, both of which can be independent risk factors for several of the types of cancers firefighters face. Although, to date, research on the impact of these prevention efforts have been limited. 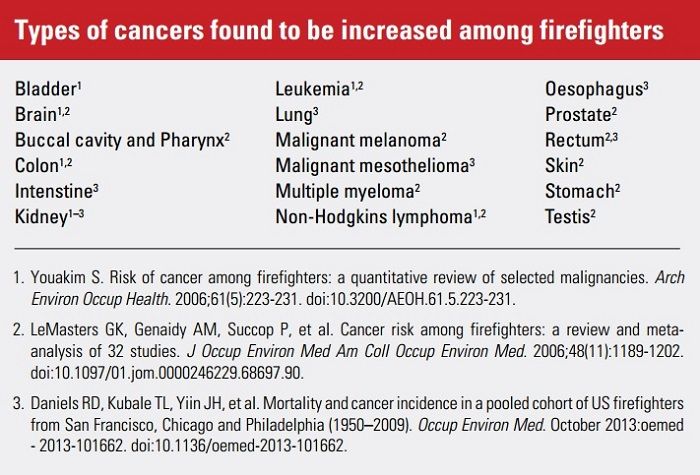 On Feb. 25, Rep. Richard Hanna (R-N.Y.) introduced a bill (H.R. 4625) mandating the Secretary of Health and Human Services to develop a voluntary patient registry for firefighters with the goal of providing reliable data on firefighter cancer incidence. Depending on how the registry is designed, it would be an extremely useful tool in quantifying types of cancers and understanding the risks by different factors such as region of the country.

While no individual study can provide all the answers to the questions about cancer, a national registry would play an important role in progressing the field. The bill has just been introduced, but even introducing the bill shows some significant movement on the topic and speaks to the attention it is receiving at a national level.

Working within the NFFF’s Fire Service Occupational Cancer Alliance, a group of scientists and firefighters also are focusing on the idea of a prospective cohort. The study would enroll healthy firefighters who are cancer free at baseline and follow them across time, closely monitoring their exposures and risks to see if they develop the disease.

Led by Dr. Jeff Burgess at the University of Arizona, the group hopes to better understand the relationship between occupational exposures and cancers in firefighters, find early markers of carcinogenic effects, and ultimately help prevent occupational cancers. Development of the project is in its early phases but is a significant step toward understanding the complexities of cancer among firefighters.

While research is helpful in directing prevention, policies and next steps for research, decreasing rates of cancer among firefighters has to start with increasing awareness. Boston Fire Department recently released an emotional short film that won a Hatch Award highlighting the impact of cancer deaths on their department. The Firefighter Cancer Support Network will soon be releasing their second white paper on cancer prevention. Awareness of the risks is an initial step in engaging firefighters in prevention.

Key to preventing cancer deaths — in addition to preventing the cancers in the first place — is early detection. With funding through the Assistance of Firefighter Grants program, the International Association of Fire Chiefs is working to encourage annual physicals for all firefighters.

One of the key rationales for annual physicals is the early detection of cancers as finding and treating cancers early is necessary for survival. For instance, colon cancer that is caught in the earliest stages has a greater than 90 percent fiveyear survival rate, while later stages of colon cancer that has spread has only an 11 percent five-year survival rate. Decreasing mortality from cancer for firefighters will be a combination of prevention efforts and early detection and treatment.

Because even the proper use of PPE cannot completely alleviate fireground exposures to carcinogens, research also is beginning to focus on the modifiable risk factors that play a role in the development of cancer. Several risk factors can increase chances of developing cancer, including tobacco use (both smoking and smokeless), alcohol binge drinking, sleep deprivation, poor fitness, poor nutrition and obesity. Comprehensive cancer efforts will need to move beyond just fireground exposures to include the spectrum of cancer risk factors.

While much is known about firefighters and cancer, the work is a long way from complete. Reducing cancers and cancer deaths in the fire service will take a focused effort not just from scientists, but from the larger community and firefighters who understand the risks and take actions to prevent the cancers from happening.

The Fire Chief Digital Edition, a quarterly supplement to FireChief.com and the Fire Chief eNews, brings a sharpened focus to some of the most challenging topics facing fire chiefs and fire service leaders everywhere.

The Digital Edition features contributions from some of the top experts and most progressive thinkers in the fire service.

Create a ‘Leadership Library’ to help develop your members' skills