3 ways firefighters can use ChatGPT on the job

From the Editorial Director

Constant updates from a PIO reduces speculation and uncertainty, which is especially important for the friends and family of those directly involved

What we know: A gunman entered a building Umpqua Community College in Roseburg, Oregon. Some of the first information about the active shooter incident came from the Douglas County Fire District #2 Twitter account:

"Active shooter at UCC. Please stay away from the area."

At least 9 people were killed and seven others wounded when a gunman opened fire Thursday at Umpqua Community College. 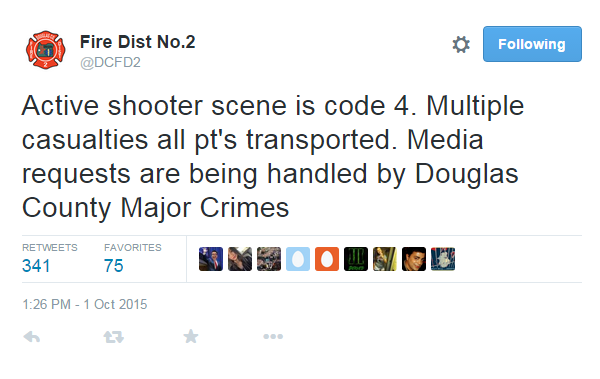 An hour later FOX news host Shep Smith lamented the lack of updates and the inability of local and national media to identify a point of contact for official statements from the scene.

Why it’s significant: Active shooters put an overwhelming strain on EMS, police, fire, and hospital resources. Of course the national media wants the latest information and details. But the need for timely, official and frequent updates about the shooter – active or neutralized, number and severity of casualties, and family reunification away from the school and at hospitals – is especially critical.

Top takeaways: This incident is only a few hours old and in the days ahead there will be much that firefighters medics can learn from the EMS response and treatment of the injured.

But right now, as this incident continues to unfold, these are my top takeaways:

1. Naming a PIO and identifying a media staging area is an immediate IC priority

In the earliest minutes of the response the incident commander needs to name a PIO and authorize the PIO to establish a media staging area. When there is no PIO the media fills the void with unconfirmed reports from parents, student tweets and elected officials that may or may not be on the scene.

The PIO needs to be able to frequently, as often as every three to five minutes, share the latest information. Even the update of, "There is no additional update and the next update will be in 5 minutes" is better than no update at all. Encourage all media to follow an official Twitter account and hashtag in those updates.

Every fire, EMS and law enforcement agency should have at the ready a single piece of paper – a tear sheet – that describes their preparation, training and equipment for active-shooter incidents. The info on this sheet about most recent training, response protocols, use of tourniquets again will provide useful content to local and national media awaiting more response.

What’s next: Families are counting on emergency responders to deliver information that is timely and free of speculation. An official spokesperson who is accessible as soon as possible reduces speculation and uncertainty, which is especially critical for the friends and family of the people directly involved.

Standard EMTs need to be ready for active shooters

Wis. EMS and police prepare together for active-shooter incident response

Greg Friese, MS, NRP, is the Lexipol Editorial Director, leading the efforts of the editorial team on PoliceOne, FireRescue1, Corrections1, EMS1 and Gov1. Greg served as the EMS1 editor-in-chief for five years. He has a bachelor's degree from the University of Wisconsin-Madison and a master's degree from the University of Idaho. He is an educator, author, national registry paramedic since 2005, and a long-distance runner. Greg was a 2010 recipient of the EMS 10 Award for innovation. He is also a three-time Jesse H. Neal award winner, the most prestigious award in specialized journalism, and the 2018 and 2020 Eddie Award winner for best Column/Blog. Connect with Greg on Twitter or LinkedIn and submit an article idea or ask questions by emailing him at greg.friese@ems1.com.