Order Parts & Ship To You 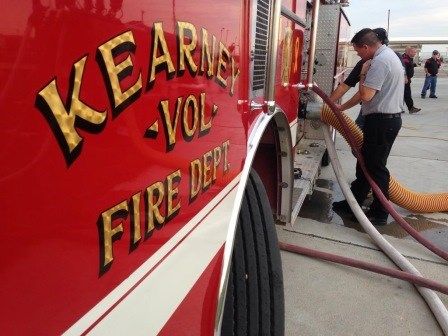 Kearney, NE (Aug 2014) -They are uncommon occurrences, but something like unexpected water pressure loss can leave firefighters in life-threatening situations, and for the Kearney Volunteer Fire Department, it's only something they've been able to talk about handling until now.

When it comes to running their water pumps, KVFD Training Officer Brad Anderson says firefighters need to know more than just on or off, but practicing for problems is tough.

“Unless you have hose ready to break or somebody shuts off a water supply, or something happens to the truck, you really can't simulate that,” says Anderson.

That changed this week as Jeff Clifton and his company FD International are in Kearney working with around 50 firefighters. They've designed a simulator that lets pump operators use their own trucks as computer software manipulates pressure. The operator must quickly fix practice problems based on real-life events.

“Anything that can go wrong, can and does go wrong on the fireground, we can recreate with our simulator and the computer systems that run it,” says Clifton.

Clifton and the FD International crew are also working with KVFD on driver training, using a special fire truck with casters underneath and between the back wheels that cause drifting and sliding like an icy road.  Beams and casters on the truck's side prevent it from rolling over during training.

Speeds are much slower than a truck would be going, but Anderson says with a lot of lives inside an expensive piece of equipment, it's vital to firefighting.

“A brand new pumper similar will run right around $500,000, our aerial [trucks] run about a million dollars, we can't afford not to take into every means possible to train our drivers to be the best that they can,” says Anderson. “We try and be very progressive when it comes to training and try and do the best job that we can for our citizens.”

Anderson says they have part of their budget devoted to training, and did work with an aerial truck specialist earlier this year.