TetraKO water enhancer attacks a fire in a manufactured home. 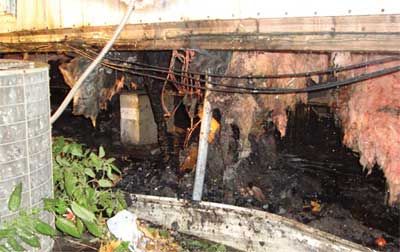 The Fridley, Minn. Fire Department is called to an early morning house fire involving a manufactured home. Firefighters arrive and find that about 25 percent of the structure is in flames. Fire is also showing underneath the home and an exposure fire is involving an adjacent shed. A 500 gallon pumper filled with TetraKO knocks down and contains the blaze while command and other crews are still working to establish a permanent water supply.

The call came in to the Fridley, Minn. fire station on November 1, 2011 at 4:20 am. “It was a manufactured home fire that we believe was caused by an overloaded electrical circuit or power strip,” states Fridley Assistant Fire Chief John Crelly. Although manufactured homes may be smaller, fires involving them can, nevertheless, be problematic. “Because of the way they’re built, manufactured home fires can be very stubborn and challenging. Oftentimes, you think you have it under control, but you keep finding a new fire source,” explains Crelly.

When Engine 3 firefighters first arrived, the home was 25 percent involved, with flames coming out of the bedroom window. “The fire was blowing out the Bravo side window, and an 8' x 10' shed three feet away had also ignited,” recalls Crelly.

“To make matters worse, by the time we arrived the fire had burned through the floor and into the space underneath the home – with exposed wood, plastic pipes, and other combustible materials,” says Crelly.

After firefighters confirmed that everyone was out of the home, the team quickly laid a 200–foot preconnect line from Engine 3 loaded with 500 gallons of TetraKO water enhancer. Firefighter Todd Fisher was on the nozzle: “Flames were coming out the back window, had engulfed the bedroom and were moving quickly into the laundry area. And because the house sits off the ground, the window was so high that we didn’t have a straight shot at the seat of the fire. We aimed our nozzle stream at the interior ceiling and walls and watched for the steam conversion.”

“The fire knockdown inside the home was quick,” recounts Fisher. “Afterward, we pulled the skirt out from the side of the home to give us access and did a few quick blasts underneath the trailer. Next, we turned our attention to the shed that had also caught fire and was loaded with clothes piled up at least a few feet deep. By the time we finished discharging TetraKO, the fire was pretty much out.”

“There wasn’t a lot of pressure on the backup team, because our initial attack with TetraKO had the fire in hand by the time a permanent water line was in place,” says Chief Crelly. “The active fire was out and it was just a matter of overhaul at that point.”