Fire trucks today aren't just red and big anymore. Who's to say what color they should be or even what shape they should have? While some may seem weird, they all serve the same purpose. Welcome to the top 10 biggest, smallest, fastest and strangest fire trucks in the world.

As you can see below, the truck may not be able to tackle fires, but this Canadian beauty from the Nobleton Fire Department in Ontario can navigate tight spaces and acts as an educational tool for school kids. The mini-apparatus is actually a converted golf cart.

Guardian of the Pink Ribbon

It may be pink, but it's pink for a reason. The Guardian of the Pink Ribbon trucks travel the country spreading awareness about women fighting cancer, donating proceeds to charity.

The Hummer fire truck can hold 300 gallons of water and can be equipped with foam. While it isn't as large as your typical apparatus, some firehouses are using Hummers to not only get firefighters to scenes faster, but to use them in tandem with regular apparatus to assist on medical calls.

Housed at the Victoria International Airport is one of the most high-tech fire trucks. The Stinger can carry 3,000 gallons of water, 400 gallons of foam, and 500 pounds of dry chemical. It even comes equipped with a turret that can pierce a plane's fuselage so that it can fight aircraft fires from the inside out.

It's not every day you can say your fire truck has been in a blockbuster movie and can transform into an Autobot. The Rosenbauer Panther was used in "Transformers 3: Dark of the Moon" as the disguised version of main character Sentinel Prime and was voiced by Leonard Nimoy. The Panther is 10 feet wide, 40 feet long, and nearly 12 feet tall.

These big orange fire trucks utitlize air force technology to fight fires. Despite its size, these apparatus are designed to light weight and compact for easy deliverablity and efficient firefighting with high-pressured and combined agent nozzles.

Some departments around the world are using a fire truck and ambulance hybrids. The apparatus come equipped with a built-in ambulance in the middle, allowing crews to use just one vehcile to be prepared for a scene. The catch-all vehicle also comes with a special lift system for stretchers. 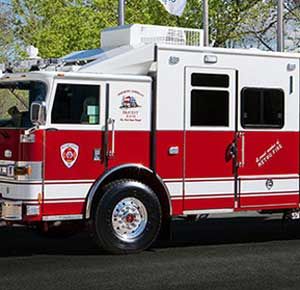 So it may not be the most technologically advanced apparatus out there, but the novelty sure gives it charm. Before diesel and gasoline, these fire trucks relied on steam power and got their start in the late 1800s and early 1900s,with some tracing their origins to Germany. Earliest models allowed for four to five firefighters to spray more water than hundreds could with hand pumpers.

While it's not really a "truck," these firefighting tanks are able to extinguish fires, navigate most hazards, like oil and chemical spills, and even roll over sources of fires without causing harm to firefighters. Other countries around the world have also started to employ the use of these tanks, like the Czech Republic, Germany, and Russia. 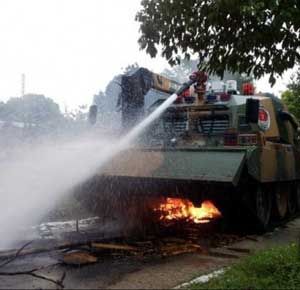 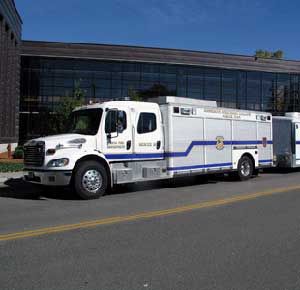