“The new generation Oshkosh Striker is at home at airports around the globe, and we’re proud to say this now includes the highest elevation international airport in the world,” said Jeff Resch, Oshkosh Airport Products vice president and general manager. “Special recognition goes to our sales and support team, including our dealership, Leits Inc., and its multidisciplinary team. Successfully managing the delivery logistics of these Striker ARFF vehicles is, in and of itself, a major accomplishment.” 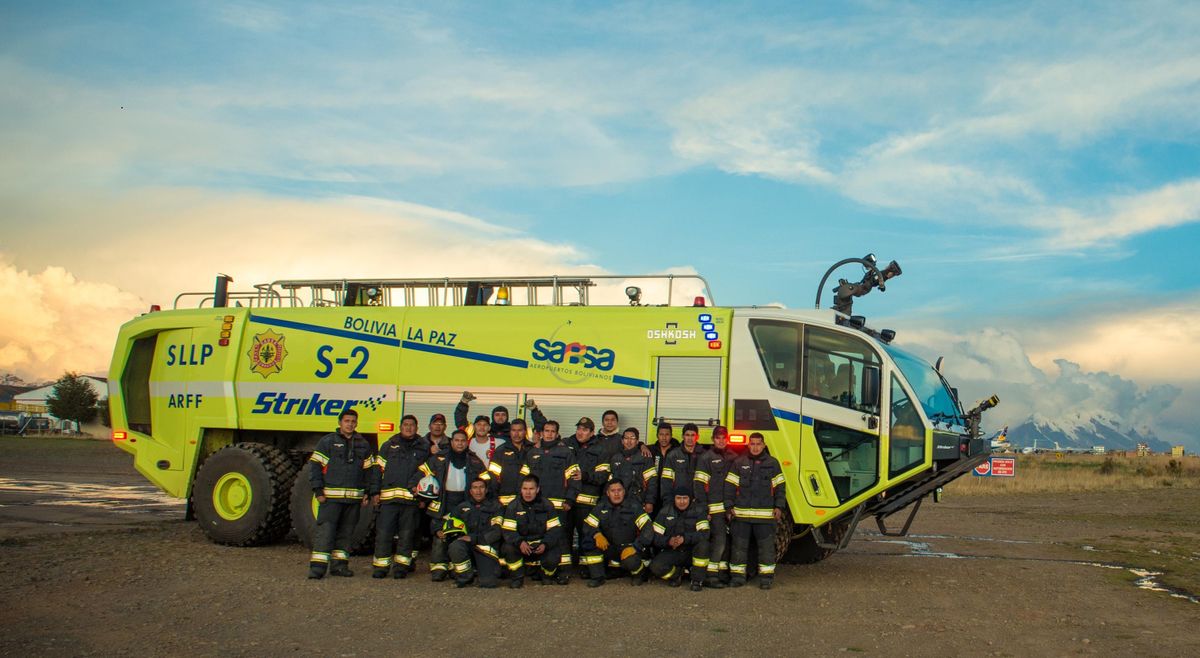 The Strikers were shipped to the port of Iquique, Chile. Subsequently, they were loaded onto flatbed vehicles for an arduous and challenging overland journey to the three airports. The vehicles were driven in a convoy to their destinations at nighttime due to regulations that reserve daytime travel for lighter vehicles. The first stop entailed traveling a distance of more than 750 kilometers (466 miles) to an elevation of 4,061 meters (13,325 feet) to reach El Alto International, the world’s highest altitude international airport.

“The people of SABSA are committed to upgrading airport emergency response capabilities throughout Bolivia, and we’re honored that Oshkosh Striker vehicles are playing an important role in this mission,” said Marcelo Solis, vice president of Leits Inc.

The new generation Oshkosh Striker, featuring advanced safety systems, delivers innovative fire suppression technology, unmatched chassis performance, and unsurpassed reliability and durability. Each of the three Striker 6 X 6 vehicles for Bolivia is outfitted with a roof turret, an Oshkosh low attack bumper turret, and a dry chemical system. The engine power pack components are readily accessed through walk-in doors on either side of the engine compartment for easier servicing.  In addition, the Striker serving at El Alto International Airport is equipped with a cold weather/high altitude package that includes piping inside the compartments to protect its firefighting components.

About Oshkosh Airport Products, LLC
Oshkosh Airport Products, LLC, an Oshkosh Corporation company, is a designer and builder of industry-leading airport firefighting and snow removal vehicles. Its flagship Striker® Aircraft Rescue and Fire Fighting (ARFF) vehicle and Oshkosh® H-Series™ snow removal chassis are known for their durability and superior performance and sold throughout the world. For more information, visit www.oshkoshairport.com.

TM All brand names referred to in this news release are trademarks of Oshkosh Corporation or its subsidiary companies.

Forward-Looking Statements
This press release contains statements that the Company believes to be “forward-looking statements” within the meaning of the Private Securities Litigation Reform Act of 1995. All statements other than statements of historical fact, including, without limitation, statements regarding the Company’s future financial position, business strategy, targets, projected sales, costs, earnings, capital expenditures, debt levels and cash flows, and plans and objectives of management for future operations, are forward-looking statements. When used in this press release, words such as “may,” “will,” “expect,” “intend,” “estimate,” “anticipate,” “believe,” “should,” “project” or “plan” or the negative thereof or variations thereon or similar terminology are generally intended to identify forward-looking statements. These forward-looking statements are not guarantees of future performance and are subject to risks, uncertainties, assumptions and other factors, some of which are beyond the Company’s control, which could cause actual results to differ materially from those expressed or implied by such forward-looking statements. These factors include the cyclical nature of the Company’s access equipment, commercial and fire & emergency markets, which are particularly impacted by the strength of U.S. and European economies; the strength of emerging market growth and projected adoption rates of work at height machinery; the expected level and timing of DoD and international defense customer procurement of products and services and funding thereof; risks related to reductions in government expenditures in light of U.S. defense budget pressures, sequestration and an uncertain DoD tactical wheeled vehicle strategy, including the Company’s ability to successfully manage the cost reductions required as a result of lower customer orders in the defense segment; the Company’s ability to win a U.S. JLTV production contract award and international defense contract awards; the Company’s ability to increase prices to raise margins or offset higher input costs; increasing commodity and other raw material costs, particularly in a sustained economic recovery; risks related to facilities consolidation and alignment, including the amounts of related costs and charges and that anticipated cost savings may not be achieved; global economic uncertainty, which could lead to additional impairment charges related to many of the Company’s intangible assets and/or a slower recovery in the Company’s cyclical businesses than Company or equity market expectations; risks related to the collectability of receivables, particularly for those businesses with exposure to construction markets; the cost of any warranty campaigns related to the Company’s products; risks related to production or shipment delays arising from quality or production issues; risks associated with international operations and sales, including foreign currency fluctuations and compliance with the Foreign Corrupt Practices Act; the Company’s ability to comply with complex laws and regulations applicable to U.S. government contractors; the impact of severe weather or natural disasters that may affect the Company, its suppliers or its customers; cyber security risks and costs of defending against, mitigating and responding to a data security breach; and risks related to the Company’s ability to successfully execute on its strategic road map and meet its long-term financial goals. Additional information concerning these and other factors is contained in the Company’s filings with the Securities and Exchange Commission. All forward-looking statements speak only as of the date of this press release. The Company assumes no obligation, and disclaims any obligation, to update information contained in this press release. Investors should be aware that the Company may not update such information until the Company’s next quarterly earnings conference call, if at all.