Election 2020 and the balance of power for the fire service

‘In an instant’ decision-making: Ensure your snap decisions are sound

ReIGNITE Quick Take: What I wish I knew before becoming a chief

Pink for a purpose: How the fire service supports breast cancer awareness

Firefighter mental health: How to manage on- and off-duty issues

A firefighter’s guide to fireground search and rescue – Part 2

3 fire chiefs walk into a bar …

The power of the ‘inside-outsider’: Clear-eyed observations that can change everything

Fire chief: How a 9-year-old hero changed my life

The call was Chief Ebmeyer's, a 25-year fire service veteran, most difficult of his career; he made the boy an honorary firefighter for his heroic actions

By Chief Chris A. Ebmeyer

On Jan. 20, 2014, the Penfield (N.Y.) Fire Company was dispatched to 39 Fondiller Ave. in a manufactured housing community after a report of a trailer on fire. The first responders on scene were a sheriff and past fire chief of the East Rochester (N.Y.) Fire Department, a neighboring fire district, who was less than three minutes away.

They arrived on scene at 4:48 a.m. to find the mobile home heavily involved. The sheriff was told by distraught residents that there were possibly three individuals unaccounted for. He attempted to make entry through a rear door, but was unable to due to the volume of the blaze.

Join us as we look back on back on some of the biggest stories and issues from 2014.

Responding from home, I arrived on scene shortly meeting my assistant chief who was also in the area plowing snow. He confirmed upon my arrival that three residents were missing. I quickly donned my turnout gear and established the command post in front of the structure.

The scene was of utter chaos. Multiple occupants of the burning home were lying in the snow in the clothes that they had been sleeping in. They were disoriented and screaming that there were others inside, and pleading with us to go and rescue them.

At this point there was no entering the trailer. The front half of the trailer quickly collapsed and the rear was a raging inferno. It was obvious to all on scene that there was no way anyone could still be alive. The heat and glow from the fire was so intense that a crowd had gathered to watch the fire.

One of the occupants, the owner’s wife, was lying in the snow suffering from smoke inhalation and burns. She was quickly taken to the first arriving ambulance for treatment, but would die days later from her injuries.

Arriving on scene
As the apparatus arrived, an initial exterior attack was set into motion and this continued for some time until the bulk of the fire was knocked down. As the smoke cleared, we located the bodies of the three missing occupants: two adults and one child.

Tyler’s body was severely burned. He was found in a chair with his arms outstretched, pointing to the body of his uncle. It was clear to me that he had attempted to lift his uncle from his bed, possibly toward the window just above him before he was overcome by heat and smoke.

It was at this point that the gravity of situation hit everyone on scene. A sense of sadness was felt by all, and very little was said for the hours the bodies laid there during the fire investigators examination for cause and origin.

Once the fire was extinguished and initial overhaul was complete, a meeting in the command post with the sheriff’s deputy investigators was called so we could discuss some of the information gathered from the surviving occupants and witnesses.

It was determined that the single-wide trailer was occupied by nine people and a dog. The victims were all either related or extended family, and the youngest victim, Tyler Doohan, was just 9 years old. However, it was somewhat unclear which bodies of the two adult victims were in the various locations in the home.

By this time, the media had gathered at the entrance to the mobile home park and had been requesting an interview. After a quick huddle with everyone in the command post, I proceeded to meet the press and gave an interview.

At this time, all I spoke about was how the initial call was dispatched, what I saw when I arrived and the approximate ages and relationships of the deceased. I fielded several questions concerning the fire and then returned to the command post.

This is when it all changed.

A heroic young man
After about 30 minutes, we held another huddle in the command post regarding where we stood with the investigation. A sheriff’s deputy who had done the initial interviews with the survivors yielded some new information.

He was able to interview Tyler’s grandmother, who later became gravely ill and died as a result of her injuries a week later. It was revealed that Tyler had done a brave thing.

Tyler had been sleeping in a chair in the living room and was awoken by either the fire or the ensuing commotion. According to the initial interviews, he then started to wake the others sleeping in the trailer with the help of his cousin.

The survivors, including Tyler and his cousin, made it outside realizing that there were two people unaccounted for. Tyler’s grandfather was still in the front bedroom and his aunt’s disabled boyfriend was sleeping in the rear bedroom.

Both Tyler and his cousin re-entered the burning trailer to attempt to rescue both men. His cousin found the heat and smoke too intense and soon exited the rear of the trailer through an open window. This was the last time that anyone had seen Tyler alive. Tyler’s cousin tried reaching in through the window and calling his name, but there was no response.

This new revelation of the events surrounding Tyler’s death made its way around the fireground. Everyone’s demeanor suddenly changed.

It was such a tragedy, but at the same time so very heroic. As the smoke cleared and the investigation continued, the mere sight of Tyler’s body with his arms outstretched toward his uncle was forever etched in all who saw him.

At this point, I was asked to do another press conference to update the media on the investigation. Upon arriving to the staging area, I remember feeling so overwhelmed about the fact that Tyler had made it out and then perished trying to save others.

The members of the media seemed a bit annoyed by the delay in any new information. One reporter asked, “Do you have anything new to tell us?” I responded with, “Maybe the fact the Tyler, the 9-year-old who was killed in the fire, had made it outside after alerting the others and went back inside to save his uncle and grandfather.”

You could have heard a pin drop after this. Everyone’s jaw dropped at the same time. A flurry of questions ensued, and at that point everything changed. This became a huge story locally, and in the coming days an international story to rival all others at that time.

The most difficult call
This is my second time as fire chief of the Penfield Fire District. My first term was more than a decade ago, way before Twitter, Facebook and the heavy Internet reliance.

I have to say that this was one of the most difficult periods in my life. Not only did everyone there have to deal with such a loss of life, but being a new father, the death of any child hits everyone with children even harder.

On top of this, as the story of Tyler’s heroism surged across the media outlets, I became inundated with emails, phone calls, interviews, social media and texts messages. I never could have imagined how big of a story this was, and how much stress comes with such a story.

During all of this, I knew that I needed to do something to honor Tyler and his heroism. I was getting hundreds of calls and emails from firefighters from coast to coast. Everyone felt the same way: Tyler was a hero and should be recognized as one.

It was only fitting that Tyler be treated as a fellow firefighter, lost in the line of duty. I was able to contact a sales representative from a local fire equipment manufacturer to expedite a helmet front with Tyler’s name on it.

The sales representative just happened to be the husband of Tyler’s elementary school teacher. It just goes to show what a small world it is.

During the next few days, after multiple interviews and arranging a firefighters funeral for Tyler, the enormity of the story hit me after a childhood friend from Sweden sent me a picture for the front page of their national newspaper that had Tyler’s picture and story on it. Another firefighter told me to Google Tyler’s name, and there were 35,000 hits from stories worldwide.

It was truly amazing and very touching.

Honoring Tyler
We had multiple gifts, cards and items sent to the fire station from all over the world. Firefighters everywhere were touched by the story and felt the need to let us know that we were doing the right thing to honor him. 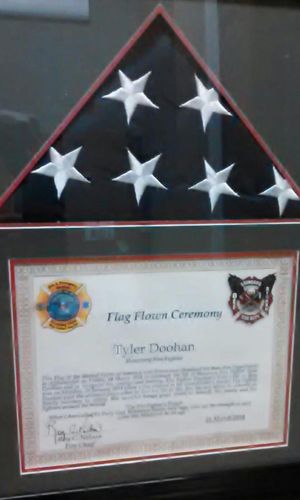 We received a plaque and a flag from the Shindand Air Base Fire Department in Afghanistan, which was signed by all the service men and women. I could have never imagined the response from the fire service community that this tragedy had unleashed.

Along with all of the gifts from various fire departments, several smoke and fire detector manufactures reached out offering donations of free detectors. We used these in the same manufactured home community where the tragedy took place.

After the funeral for Tyler, a Facebook page for Honorary Firefighter Tyler Doohan was set up. Fire departments from all over the world were putting Tyler Doohan on their roster and run cards.

Every time I viewed this, and even now, I still hold a lot of grief about the tragic loss of his short life and how it touched so many thousands of people from all cultures and walks of life.

It was determined that the most likely cause of the fire was an electrical short. A dog had been digging near a metal threshold that separated two rooms the preceding day. Tyler’s grandfather had installed a new metal threshold over the spot, not realizing that there were electrical wires running underneath.

The breaker for this area in the trailer had tripped four times the night before the fire, indicating a possible electrical issue.

This was the most stressful period I've ever experienced in my 25 years in the fire service.

Our fire company did an amazing job standing together in the tradition of the fire service recognizing such a heroic action by such a young man, who unfortunately lost his life. Tyler had come from a broken home, but his actions showed the true nature of his character. He touched so many lives in his short time on earth.

N.C. firefighters save life of 1-year-old who swallowed penny

My love affair with 2 buildings: Remembering the WTC on 9/11

Fire Command: A poem dedicated to all first responders