How to buy extrication tools (eBook)

Mission-oriented culture: Focus on training basics and advanced skills as a team

‘Everything on this truck is my responsibility’: A day in the life of an apparatus operator

3 tips for first responder spouses to maintain a happy marriage

The impacts of ongoing traumatic exposures

The unwritten rules of trading shifts

Reader response: ‘Why do you bash volunteer firefighters?’

‘I saw you on TikTok’: The fire service recruitment strategy no one is talking about

The rope rescue component of the technical rescue family has evolved at a rapid pace over the past 10 years. With the influx of new technologies in all facets of rope rescue, adaptation and implementation has not always kept up with the needs of our responders.

All levels of operation and training from the individual department to state-level training programs must do their part in keeping up with the times. Having new and many times safer options available to the first responders, but not utilizing them, is not being a good steward of our industry.

I am not advocating that every time something new appears in a catalog that you run out and change your programs. However, the innovations that do come along which enhance the rope rescue capability both operationally and safety-wise have to be adopted.

Safety has to be our paramount focus with any system we use. The new equipment available provides levels of safety that were never even thought of a short time ago. Any device that defaults to the safe or locked/non-moving mode is our best friend.

Most organizations that claim to do rope rescue "a lot" actually do it a very small percentage of their overall incident response. This is why implementing equipment that will be more user-friendly is our best tool for responder safety.

We also have to focus on the entire process when adding new devices to our cache of equipment. One area that we have changed over the past few years is utilizing a "set of 4s" which go by a number of names including "The AZTEK," for our primary attachment of the attendant to a litter operation. The AZTEK attachment method shown with the addition of an Etrier, which provides the attendant added maneuverability when tending to a victim in the litter. (Photo/Bob Duemmel) 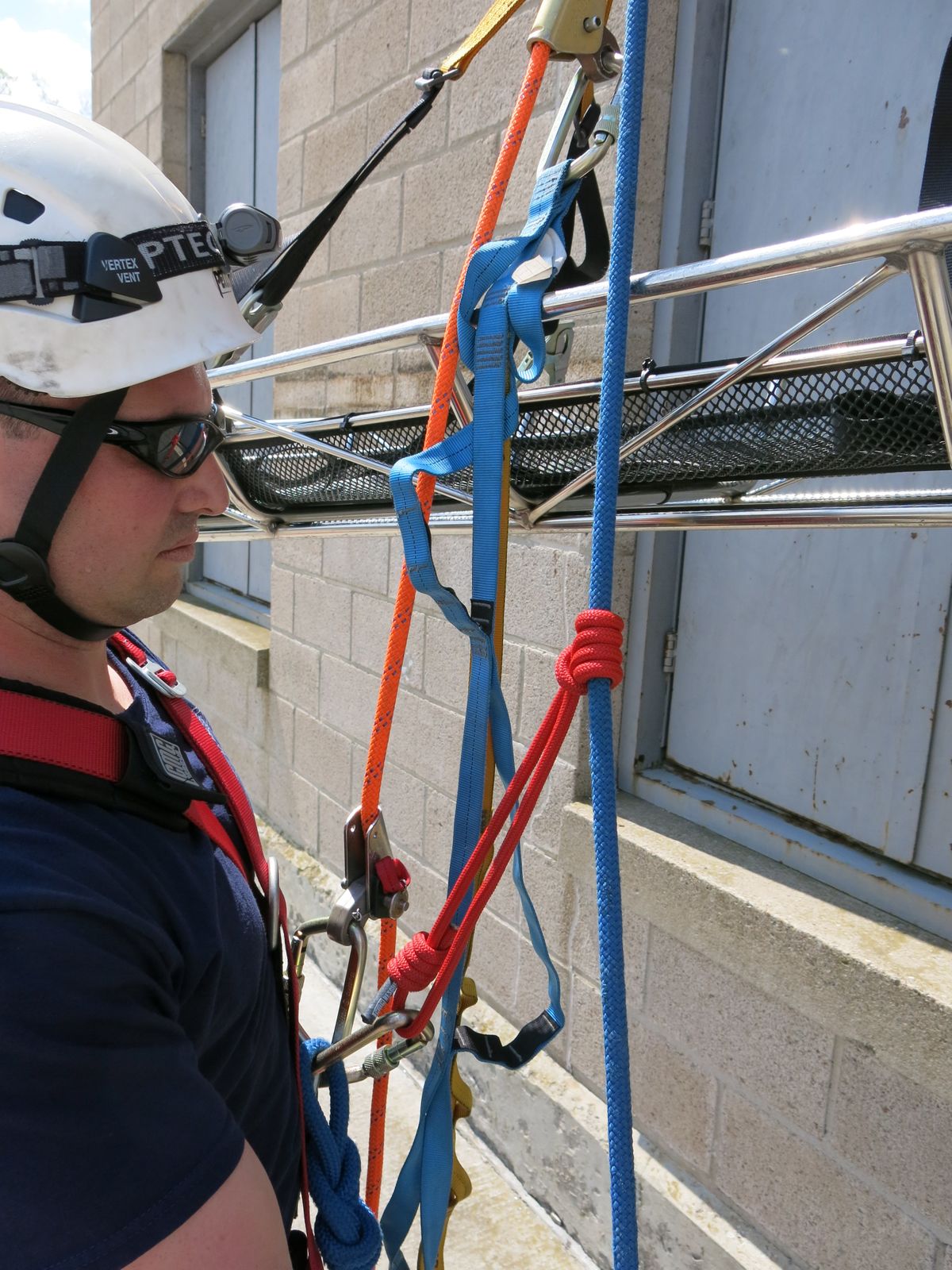 Early on, the argument from those presenting these methods was that not everyone has the newer technologies therefore these old methods have to be retained. I fully agree that five to 10 years ago that was a correct statement. Today, if an organization is in the rope rescue game, then they have most likely grown with the times and are using these newer, safer and more efficient devices. Technical rescue cannot be lead down the path of "many years of tradition unimpeded by progress."

Rope rescue programs are implementing many types of changes due to new technologies. Two of those changes – attendant attachment to the litter and belay options – are discussed here.

Attendant attachments to the litter

Some of the reasons for the evolution from a pick off strap to a Yosemite rig then to the Set of 4s for attendant’s attachment are:

We utilize a work around for this which provides an extended length of the Belay line while maintaining the safety of the attendant. As an example, if the Set of 4s allows the attendant to extend out 10 feet, then it would only make sense that the Belay has to be of equal length.

1. Tie a single loop Figure 8 at the end of the Belay rope.
2. Extend the Belay line tail to the desired length (10’ for our example).
3. Tie a Butterfly knot in the belay line (remember to take the rope from the bag end of the line for this knot so that you do not shorten your belay tail by using the rope from the measured distance as a part of your Butterfly knot).
4. Attach the Butterfly knot to the litter next to the main line attachment on an independent Carabiner.
5. Place a single triple wrapped prusik loop on the Belay tail.
6. Join it to the carabiner on the terminal knot of the Belay line when attaching to the attendant.
7. Utilize the prusik to let out or take up slack in the Belay line depending on the attendants riding position.

This method allows the slack in the Belay tail to be adjusted whenever the attendant moves within the system. Keeping the Belay tail taunt minimized the fall factor in the event of a main line failure. Early grassroots testing provided data, which indicated many of the methods used to belay a live load were not sufficient to safely arrest the load when the main line experienced a catastrophic failure.

Once again, new technologies have helped improve our safety levels when used as designed and with proper training. Devices like the Petzl ID provide one special capability that our previous generation of belay systems such as the Tandem Prusik Belay System did not; when something goes wrong, the Petzl ID defaults to a non-moving or locked mode.

With a Tandem Prusik system, there is a very real possibility that if not properly attended and adjusted that the belay line could travel through the system for a significant distance before any arresting of the line can take place.

I have touched on a very small percentage of the new technologies now available to first responders. Explore your options and remember the importance of initial training and refresher training in all rescue activities. The new technologies we enjoy today and the new items that will be available in the future will never replace responsible and dedicated training programs.

Bob Duemmel has been in the fire service since 1976 when he joined the U.S. Air Force as a crash rescue specialist. He spent 30 years with the Rochester (N.Y.) Fire Department, retiring as captain and having served as the department’s special operations officer. He currently serves as the deputy coordinator for special operations for the Monroe County (N.Y.) Fire Bureau. He has an associates degree in fire science. Connect with Duemmel on LinkedIn.

Mission-oriented culture: Focus on training basics and advanced skills as a team