Preparing for the COVID-19 surge: It’s going to be war

How to prep your department for WUI fires

Wildland fires are migrating into populated areas with greater frequency and severity, and taming these beasts requires a whole different mindset than structural firefighting

This feature is part of our new Fire Chief Digital Edition, a quarterly supplement to FireChief.com that brings a sharpened focus to some of the most challenging topics facing fire chiefs and fire service leaders everywhere. To read all of the articles included in the Spring 2017 issue, click here.

In the United States, we’ve become accustomed to seeing massive wildfires destroy thousands of acres of forested land each year in our western states. Beyond forested lands, those same fires also destroy millions of dollars in property as human development continues to encroach upon land in the wildland urban interface.

California is in its sixth year of drought, which sparked a range of water restrictions in the state and was barely dented by rains brought by El Nino in 2015 and 2016.

This issue focuses on the history, current trends and future of the WUI fire threat

But warming temperatures and uncertain rainfall mean that if more isn’t done to slow climate change, droughts lasting 35 years are likely to blight western states by the end of the century, according to a study published in Science Advances.

In recent years, significant drought conditions have developed in other regions of the country, especially in southeastern states. The devastating WUI fires that ravaged North Carolina and Tennessee in the later months of 2016 precipitated the evacuation of thousands of residents and destroyed millions of dollars in property. 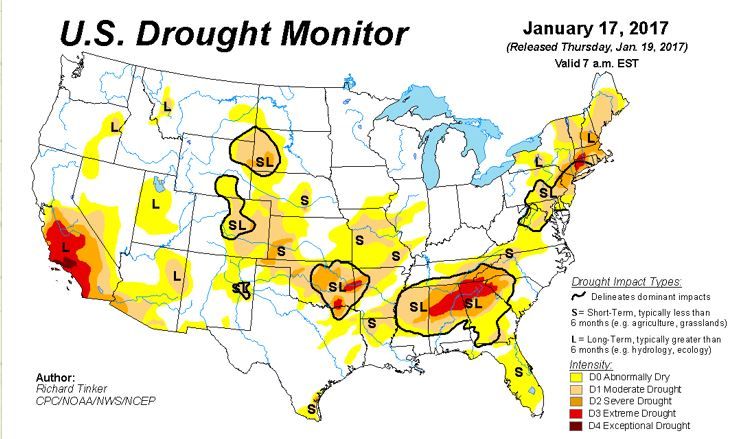 Figure 1. Note the areas where both short-term and long-term drought impacts are being felt. Of particular interest to the fire service are the areas affected by short-term drought, as it has an immediate impact on grasslands and forested lands. The U.S. Drought Monitor is jointly produced by the National Drought Mitigation Center at the University of Nebraska-Lincoln, the United States Department of Agriculture and the National Oceanic and Atmospheric Administration. (Map courtesy of NDMC-UNL)

Thirty-three percent of the United States is covered by forested lands. Maine, at 90 percent, and West Virginia, at 74 percent, are the two most heavily forested states per square mile. You might be surprised to learn that 59 percent of the total forest land in the United States is privately owned; public entities and state governments account for another 10 percent, with the federal government controlling the remaining 31 percent. In total, the United States has 822 million acres of forested land. Most relevant to our concerns as firefighters is the amount of forested land in our country that has become tinder due to trees dead from drought and insect infestations like the ips beetle, spruce beetle, fir beetle and mountain pine beetle. According to a Yale University report, since 2000, the U.S. and Canadian Rocky Mountains alone have seen the death of more than 70,000 square miles of forest land. That’s an area the size of Washington state.

Large tracts of dead forest acreage are becoming more common in other areas of the country from similar causes. Put bluntly, these stands of what are essentially vertical lumber yards are ripe for ignition from natural and human causes, such as lightning strikes or careless campfires.

As human development continues to encroach upon forested lands, more departments are finding themselves engaged in wildland firefighting than ever before. For many of those departments, there are serious gaps between their operational capabilities and the potential for engaging fires in the WUI. Those WUI gaps include but aren’t limited to:

Fire departments need to ensure that all of their firefighters and officers are trained in wildland firefighting principles and practices regardless of what kind of community they serve on a daily basis. When the wildfire alarm comes, it’s going to be an all-hands response, especially in rural areas, and those crews are going to need quick reinforcements from their suburban and urban firefighting brothers and sisters.

USFA also has free training materials that include these wildland structural firefighting courses.

Fire departments should become proactive in assessing the WUI fire threat in their communities and informing and educating the public about that threat and how everyone has a role in preventing outbreaks and minimizing the impact when a fire does occur.

Effective public fire safety education for WUI fires differs greatly from similar programs that focus on residential structure fires. The National Fire Protection Association’s Firewise Communities Program offers conferences, online courses and workshops on several of these WUI topics, including the home ignition zone, landscaping and firefighter safety. For local jurisdictions and fire departments looking for guidance when considering how to incorporate WUI safety issues into the planning and regulatory process, the Firewise program has a dedicated section, Regulations and Plans, that contains information related to policy and legislation, comprehensive planning and codes and standards to reduce the impact of wildfire to a community. One of the greatest challenges that structural firefighters encounter when combating fire in the WUI is their structural firefighting ensemble. The same PPE ensemble that’s designed to provide protection from the thermal hazards of interior structural firefighting prevents the effective dissipation of heat and can lead to heat-related injuries like heat exhaustion or heat stroke. “NFPA 1977: Standard for Protective Clothing and Equipment for Wildland Fire Fighting” lists the minimum required PPE for wildland firefighting as:

Fire departments should look at providing PPE options beyond the structural firefighting protective ensemble for their personnel to use at WUI fires. While firefighters may be able to operate at smaller-scale incidents wearing their structural ensemble, the incident command needs to have the option of getting personnel into WUI-suitable PPE as quickly as possible. Personnel should carry their WUI PPE with them while on duty, particularly when there’s a high probability for WUI fires to start and spread quickly. Volunteer-staffed and combination departments should make provisions on their apparatus or support vehicles for volunteer members to keep their WUI PPE so that it’s more readily available.

For starters, fire departments should ensure that their Type I and Type II engines are carrying a minimum of 200 feet of 1-inch, single-jacketed fire hose, commonly known as forestry hose — 400 feet is better. If your Type I or II engine could participate in wildland or WUI fire operations at federal incidents and your department wants to be eligible to file for compensation, it must be NFPA 1901 compliant and meet the minimum FEMA Resource Typing Definition. For information on staffing levels, pump size, water tank capabilities and equipment, see FEMA’s Resource Typing Definition for Public and Private Services and Resources: Fire and Hazardous Materials. If your department’s fire apparatus has pump-and-roll capabilities, ensure that all personnel have the training and skills to work with that capability. This is critical for both apparatus engineers and firefighters. Your department should also have well-defined SOGs for conducting pump-and-roll operations at wildland and WUI fires.

Another key factor is using NIMS. Most departments that use NIMS are likely comfortable using it for their “bread and butter” calls — residential structure fires and smaller incidents. Such incidents are typically handled with an incident commander, a safety officer and a few division or group supervisors.

By contrast, a quickly developing WUI fire with a footprint of four or five acres and multiple structures either on fire or being exposed to fire will require that the following six roles be rapidly established:

1. Division supervisors with resources on multiple sides of the fire.
2. Group supervisors with resources to clear areas of occupants, conduct structural triage and protect exposed structures.
3. Water supply officer.
4. Safety officers.
5. Medical unit for the care and rehabilitation of firefighters.
6. Liaison officer to coordinate the response of outside resources, like state forestry personnel, and equipment like bulldozers and tractors and aircraft.

Your department’s personnel need to have the training and practice to implement NIMS on such a scale for an incident that may happen only once or twice a year, perhaps less. And that implementation is a challenge for any size department.

Those mutual aid departments that your department works with on a regular basis are likely in the same state of readiness for response to WUI fires. It’s incumbent upon your department’s leaders to engage the leaders of those departments in developing mutual aid plans that specifically address the expanded resource and NIMS needs for a wildland or WUI fire.

Those conversations are a perfect time to coordinate training and equipment acquisition needs for better efficiencies (making everyone’s available dollars go further) and more effective mutual aid operations. That means everyone receives the same training and operates under the same SOGs. A great resource to help get those conversations going and provide information and guidance is the Wildland Fires Lessons Learned Center. On that website, you’ll find wildland fire education programs, links to videos and podcasts detailing lessons learned and a searchable database of incident reviews containing recommendations.In the words of noted public safety risk management expert, Gordon Graham, “Predictable is preventable.” Will you be ready?

Batt. Chief Robert Avsec (Ret.) served with the Chesterfield (Va.) Fire & EMS Department for 26 years and is a regular contributor to Fire Chief and FireRescue1.

The Fire Chief Digital Edition, a quarterly supplement to FireChief.com and the Fire Chief eNews, brings a sharpened focus to some of the most challenging topics facing fire chiefs and fire service leaders everywhere.

The Digital Edition features contributions from some of the top experts and most progressive thinkers in the fire service.

EMS challenges in the wildland setting