Election 2020 and the balance of power for the fire service

‘In an instant’ decision-making: Ensure your snap decisions are sound

ReIGNITE Quick Take: What I wish I knew before becoming a chief

Pink for a purpose: How the fire service supports breast cancer awareness

Firefighter mental health: How to manage on- and off-duty issues

A firefighter’s guide to fireground search and rescue – Part 2

3 fire chiefs walk into a bar …

The power of the ‘inside-outsider’: Clear-eyed observations that can change everything

The 97-year-old building was a collapse hazard, forcing a defensive attack

NEW ORLEANS — Firefighters are still on the scene of the 3-alarm fire that ripped through a Central City warehouse Monday night and there is still no word as to what might have caused the massive blaze, authorities said. According to a statement from the New Orleans Fire Department, the fire, which began shortly before 11 p.m., destroyed two out of three buildings belonging to the Eagle Insulation facility, a 97-year-old complex in the 2400 block of Clio Street which is approximately 35,000 square feet and stretches an entire block.

When firefighters responded to the scene they found heavy smoke pouring out of a brick office building and one metal warehouse already completely engulfed in flames. The fire quickly escalated to a three-alarm status and responders spent hours getting the fire under control, largely due to the size of the building and the heavy load of flammable insulation being stored inside the complex.

Firefighters attempted to enter the brick building, which housed the company's offices, but were forced out by the large flames and the threat of the building's imminent collapse. One of the walls belonging to the central building partially collapsed on Clio Street, authorities said. 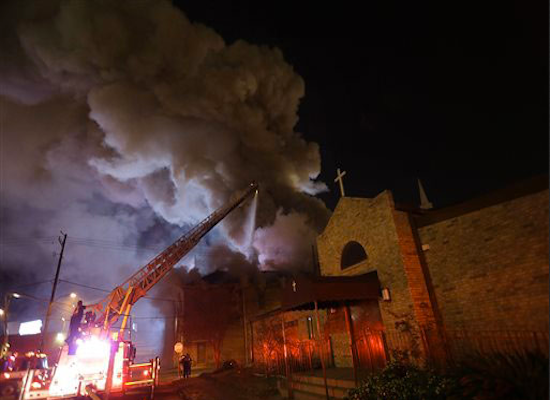 Ky. FF injured in fall down stairs at house fire