‘The rumor meal’: Elevate the kitchen table by eliminating gossip

After breaking precedent and publicly discussing the terminations, Chief Hood wrote that he hopes fire personnel would now understand why he took the action he did

SAN ANTONIO — Fire Chief Charles Hood said Tuesday that the rumors and misinformation swirling around the dismissal of six fire cadets forced him to take the unorthodox step of openly discussing personnel matters.

Hood detailed the much-ballyhooed case in a memo obtained by the San Antonio Express-News dated Sept. 12 and sent to fire personnel Tuesday. Hood reveals in the memo that the cadets may re-apply for jobs in the Fire Department.

Fortunately, there are steps fire chiefs can take to make this job easier for the officers and the firefighters

In early August, six cadets were caught for drinking on the job and subsequently dismissed. Until now, the details of the case have been largely withheld from the public.

“It has been the practice of the SAFD and the city of San Antonio not to discuss personnel matters, especially as they relate to civilian employees, but the continued misinformation communicated through both mainstream and social media compel me to share the details of their resignations/terminations,” he wrote in the memo.

In late August, Hood held a news conference to confirm that he’d dismissed Scott Kneupper, Mike Martin, Joseph Angelo, Clifford King, Rene Loredo (Ricardo) and Kevin Martinez. All were given the chance to resign rather than be fired; four resigned and two were terminated, reducing the size of the training class by more than 10 percent.

Hood revealed few details at the August press conference because of the nature of the matters. He said then that the department was trying to “maintain their privacy, their confidentiality, to where if they would’ve all resigned, no one would probably know about this,” allowing them to seek other employment without repercussions.

Since then, however, the San Antonio Professional Firefighters Association, some union members, residents and politicians have lambasted Hood and his top brass for dismissing the cadets, the chief said in a Tuesday interview with the San Antonio Express-News. 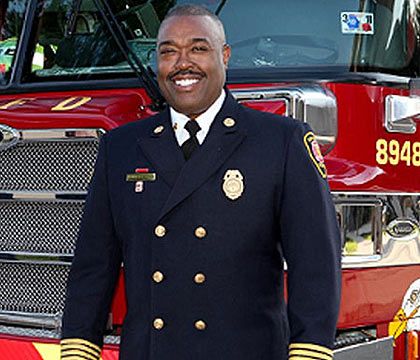 Hood said talking publicly about what happened is extraordinary.

“I think this is the first time in almost 10 years that I’ve ever gone to this extreme. But with the vicious attacks on my staff and myself, it came to a point where we felt compelled to let the facts out,” Hood said. “In the beginning, we did everything we could to try to protect the information of these young men because they are good young men, they just made some horrific decisions.”

He outlined these details in his memo:

On Aug. 4, eight SAFD cadets were at University Hospital doing clinical rotations, part of their emergency medical technician training. They began at 6:30 a.m. and were scheduled to work until 2:30 p.m., the memo stated. Overseen by an official from the University of Texas Health Science Center, the cadets asked to leave early in order to study for an upcoming exam.

The six cadets who were ultimately dismissed went to a nearby Twin Peaks restaurant, where their stays ranged from 90 minutes to eight hours. The memo states that someone affiliated with University Hospital was at the restaurant, recognized them as SAFD cadets and contacted SAFD Training Academy staff. The cadets were questioned, the memo revealed, and admitted to driving after having consumed alcohol.

Hood’s memo says that cadets are informed upon starting the academy that they’re not to consume alcohol at all — on duty or otherwise — while they’re cadets or during their subsequent probationary period. They’re also instructed to avoid places like Twin Peaks and     Hooters, the memo says.

“An important mitigating factor was that most of the cadets were at Twin Peaks during city time,” the memo says.

In an interview, Hood asked rhetorically if cadets can’t respect the rules just 15 weeks into training, how can he expect them to act on the job.

Chris Steele, president of the fire union, said his membership is considering whether to sue the city over the cadets’ dismissal. He said he believes their constitutional rights were violated. Steele said some cadets wanted legal representation and were told they couldn’t be represented by attorneys. Steele said it’s his association’s belief that the dismissed cadets have the right to meet their accuser and see the evidence.

Hood said each of the six had given written statements outlining their infractions.

Sources within the Fire Department say the membership is split. Union officials want to fight the matter while others either want to offer support but not cover the cost of any help, while others don’t want the union involved at all. Cadets are not members of the local fire union.

In the memo, Hood wrote that he hopes fire personnel would now understand why he took the action he did.

“Although it was my intent to protect the privacy and humility of the six cadets involved, the malicious rumors and misinformation circulating throughout the department left me with no other option but to lay out the facts,” he wrote. “It is my sincere hope that personnel now understand the circumstances that led to this extremely difficult decision.”