For a new fire department, even basic radio communications are a challenge to overcome

The International Fire Relief Mission's trip to the Barraterre community in the Bahamas represented many firsts for the nonprofit group. One of those was establishing radio communications for the new fire department.

This trip was the first in its seven-year history that IFRM had both donated radio equipment and experts who volunteered their time to build the system. Former fire Asst. Chief Ryan Ruckel is that radio expert who established a communication system that had observers from Nassau Fire Department envious.

What that effort looked like at the end of the day was one repeater that can cover a 96-square-mile radius, a base radio at the fire station, a radio in the fire truck and the fire chief's vehicle, and several handheld radios for the officers. The repeater would cover all of the island's 72 square miles except that Barraterre is on the island's western end pushing much of the signal into the ocean.

News Report: IFRM in the Bahamas

FR1 editor in chief Rick Markley donates his time to the International Fire Relief Mission and is just off a trip to build a fire department in the Bahamas. Here's a collection of stories about that effort.

"I learned that what I had planned to take an hour, could take a whole day," Ruckel said of setting up the department's radio system.

Adapting to the environment
One of the unexpected challenges for Rucklel came from something as simple as the fire truck's antenna. The donated truck was selected for Barraterre in part because of its road height. The island is heavily forested and the vehicle will likely be pressed into service to fight wildland fires in semi-accessible places.

The community has numerous low-hanging power and telephone lines, which would come into contact with the antenna were it mounted at the highest point. That position is optimal for reception, but a safety hazard.

After experimenting with mounting it magnetically to the center of the hood near the windshield, Ruckel and fellow IFRM volunteer Lt. Jared Krato were able to trim the height of the base and return the antenna to the roof. 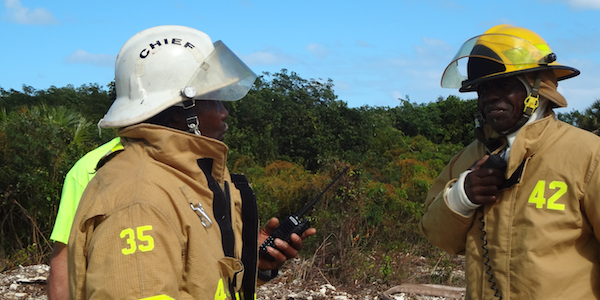 Radio 101
Ruckel led the Barraterre volunteer firefighters through a short, yet concise class on how the radios work and how and when to use them.

That information were put into practice during a live burn demonstration two days later when the chief, company officer and pump operator were told to use radio communications during their fire attack. The live burn was held in a clearing about a mile from the fire station and its repeater.

The radios worked brilliantly. The new firefighters' radio skills were, as one would expect from those who had never used radios before, a work in progress. But, that's why we train. The problems were common: not hearing, not understanding and not acknowledging radio communications.

"Kill the fire until it is completely dead," was one of the radio traffic instructions to the attack crew during a wildland evolution.

By the last of the three live-burn evolutions all three of those problems began to smooth out.

If other communities on Exuma develop fire departments, they can tie into Barraterre's system with some additional equipment.

Rick Markley is the former editor-in-chief of FireRescue1 and Fire Chief, a volunteer firefighter and fire investigator. He serves on the board of directors of and is actively involved with the International Fire Relief Mission, a humanitarian aid organization that delivers unused fire and EMS equipment to firefighters in developing countries. He holds a bachelor's degree in communications and a master's of fine arts. He has logged more than 15 years as an editor-in-chief and written numerous articles on firefighting. He can be reached at